The United Steelworkers (USW) in the USA and the AFL-CIO are supporting striking workers at Palermo’s Pizza in Milwaukee, Wisconsin.  The strike at the frozen pizza factory started in June this year when workers walked out seeking recognition for their union in the face of unsafe conditions and worker intimidation.

The Steelworkers and the AFL-CIO are asking retailer Costco to enforce its supplier code of conduct and drop Palermo’s Pizza until it allows striking workers to hold a free and fair union election.

Joining the Palermo Workers’ Union, the AFL-CIO, and Voces de la Frontera (a Wisconsin immigrant rights and workers’ center), the Steelworkers called for a national boycott of Palermo’s Pizza products.

The Palermo workers say if their union wins union rights in a ballot vote at the company they expect to affiliate to the Steelworkers union. Read the full story of the dispute by clicking here.

Demonstrations in support of the pizza workers are taking place across 40 cities in the USA. 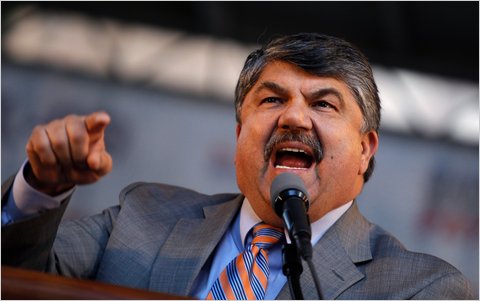 AFL-CIO President Richard Trumka has called for a national boycott of Palermo’s products,  announced its support of a nationwide boycott of Milwaukee-based Palermo in response to what it calls the company’s “blatant disregard of its workers’ choice to form a union.” The boycott covers Palermo’s brand pizza, “Classics” brand pizza and private-label brand frozen pizza made by Palermo, including Costco’s Kirkland brand, the AFL-CIO said.

“The 12 million union families of the AFL-CIO are proud to stand with these Wisconsin workers who have bravely joined together for a voice on the job,” AFL-CIO president Trumka said.

“Their courage and strength are a model for working people around the country whose rights are being violated and voices silenced. We hope that this boycott will encourage Palermo to finally respect its workers who work so hard for them every day.”

In the face of the demonstrations the company CEO Giacomo Fallucca has now written to AFL-CIO President Richard Trumka seeking talks saying “there has been much misinformation communicated regarding Palermo’s” after Trumka endorsed a national boycott of Palermo’s Pizza and its major pizza customer, Costco.

For more information visit the Palermo Workers Union website by clicking here or on the graphic above.