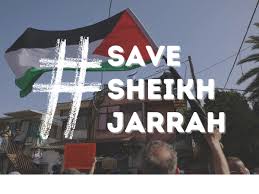 We stand shoulder to shoulder with the Palestinian people and we will continue to do so.

Under the cover of darkness and freezing cold the Israeli state violently attacked the home of the Sal-hee-ya family. They beat the family, they arrested the family and they destroyed their home of over 60 years.

There cannot be any argument that this was not the actions of a violent apartheid state who are ethnically cleansing East Jerusalem.

15 people are now homeless, and join the thousands of Palestinians ethnically cleansed by Israel to make way for their illegal settlers.

The cruelty of this act and the cowardice of it, shows the world just how barbaric Israel now is.

Yet the world stands by and watches.

Our governments only urge caution to Israel, and by doing nothing the Israeli state is given a green light to continue their suppression, repression, ethnic cleansing and implementation of apartheid against the Palestinians,

And it is outrageous when we witness the mass destruction of Gaza at the hands of Israeli military, the ethnic cleansing of Sheikh Jarrah, and this most recent act against the Sal-hee-ya family, to suggest that this a war of two equal parties.

We should never forget thought that with international boycott actions we helped bring down apartheid in South Africa and ensured that Nelson Mandela became president and we can do this again.

We must stand with people like the Sal-hee-yafamily who are attacked and oppressed by states wherever it occurs in the world, in Colombia, in Turkey, in Western Sahara and in Palestine.

We must fight against our governments supporting the regimes that inflict oppression, ethnic cleansing, violence and apartheid.

We must fight back against our own government’s plans designed to oppress our solidarity;

For too long the international community has stood by as the Israeli state has been allowed to carry out its crimes and this cannot be tolerated or accepted any longer.

So I say this – even though it is difficult, and there are forces against us we can end Israeli apartheid!

Composite one – Israel and Palestine

Together with the de facto annexation of Palestinian land by accelerated settlement building and statements of Israel’s intention to proceed with annexation, it is ever clearer that Israel is intent on eliminating any prospects of Palestinian self-determination.

Conference notes the TUC 2020 Congress motion describing such settlement building and annexation as ‘another significant step’ towards the UN Crime of Apartheid, and calling on the European & international trade union movement to join the international campaign to stop annexation and end apartheid.

Conference also notes the unequivocal 2021 reports by by B’Tselem and Human Rights Watch that conclude unequivocally that Israel is practising the crime of apartheid as defined by the UN.

Conference welcomes the International Criminal Court decision to hold an inquiry into abuses committed in the Occupied Palestinian Territories since 2014.

Conference resolves that action is needed now due to Israel’s continuing illegal actions and that Labour should adhere to an ethical policy on all UK trade with Israel, including stopping any arms trade used to violate Palestinian human rights and trade with illegal Israeli settlements.

Conference resolves to support “effective measures” including sanctions, as called for by Palestinian civil society, against actions by the Israeli government that are illegal according to international law; in particular to ensure that Israel stops the building of settlements, reverses any annexation, ends the occupation of the West Bank, the blockade of Gaza, brings down the Wall and respects the right of Palestinian people, as enshrined in international law, to return to their homes.

Conference resolves that the Labour Party must stand on the right side of history and abide by these resolutions in its policy, communications and political strategy.