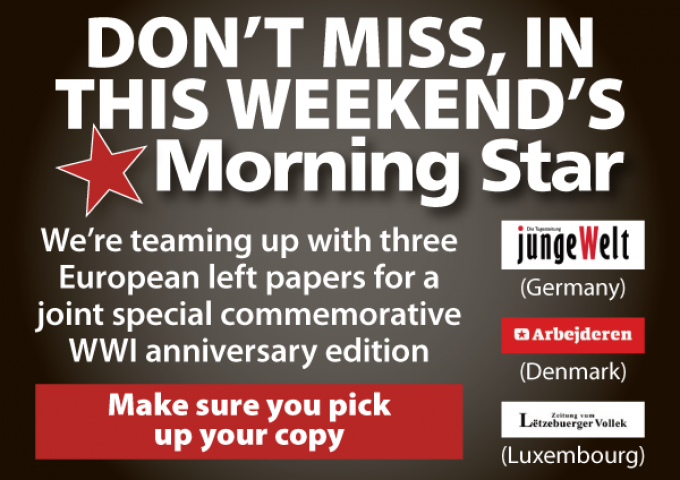 The Morning Star – Britain’s daily newspaper of the Left – is publishing an international pullout this weekend to mark the centenary of World War 1 with views and analysis which breaks with the establishment consensus and offers a socialist perspective on the bloodshed, putting the record straight.

In a unique collaboration between four socialist newspapers – including Arbejderen of Denmark, junge Welt of Germany and Zeitung vum Letzebuerger Vollek of Luxembourg – the Morning Star is publishing a pullout souvenir edition with contributions from historians, activists and commentators.

The pullout will be published in all four countries during the centenary week. As a member of the management committee, you will know you can get it from your local retailer or better still and if you haven’t already, why not subscribe to the Morning Star on your phone or laptop, by clicking here.

The Morning Star will have eight pages of hard-hitting feature pieces and pictures on “the war that didn’t end all wars”,  led to slaughter on an industrial scale and a legacy of imperialism and conflict which continues to this day.

As Prime Minister David Cameron eyes ‘The Great War’ as a PR opportunity for the election of the Conservatives in 2015, and with the mainstream media slavishly following his lead, the Morning Star supplement tells it like it is, from the Left.

Acting Editor Ben Chacko said: “I know of no newspaper in Britain which is joining hands with others in Europe, and especially Germany, to tell the truth about the carnage of the first world war, why it happened, and who profited from it. We were then, as in many respects we are now, a nation of lions led by donkeys. We will not let David Cameron and his media cronies hijack history and portray this centenary as a patriotic exercise for the election of a Tory Government.”

The special souvenir edition offers analysis and historical insight on a range of issues related to the war, from how it affected women and their position in society, to those voices of courage from the Left who opposed it to their personal cost.

Writers from the four publications will appear in the pullout.

Ben Chacko added:  “This is a unique and fruitful collaboration between four major newspapers of the European Left. It is not a one-off, and we intend to come together again to offer working people of our countries a socialist perspective on the issues that matter to us all.”

The souvenir edition is free in the 32-page weekend Morning Star (Saturday and Sunday 2/3August), which sells for £1.

It is available at all key retail outlets. After that, those who want extra copies or special orders of the souvenir edition can buy it for £1 from the Morning Star online shop here or by contacting Bernadette Keaveney or calling 020 8510 0815.