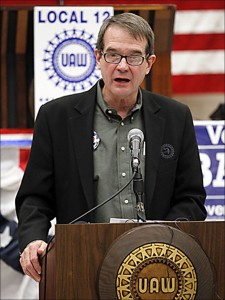 What happened in Chattanooga is starting to become much clearer, thanks to some excellent investigative journalism by Phil Williams of WTVF-TV in Nashville. And what happened could have far-reaching implications beyond Chattanooga.

Williams reported on Monday that he obtained confidential documents that show how far Tenn. Gov. Bill Haslam and GOP state lawmakers were willing to go to make sure workers would not have their right to union representation.

Haslam, according to the documents, essentially offered Volkswagen $300 million in taxpayer dollars for plant expansion — but only if the plant remained union-free.

Even before Williams made public the secret documents, Haslam and other Tennessee officials made no secret of their disdain for the UAW or the right of Volkswagen workers to freely choose representation. But the coercion of millions of dollars in taxpayer-funded incentives for expansion of their plant sealed the deal.

Tennessee House Democratic Caucus Chair Mike Turner put it best: “Looks like to me they put a gun to their head and said, ‘Look, this is what we are going to give you if you do it our way and we are going to jerk it away if you don’t.’ ”

The state, by the way, took the incentives off the table just before votes were being cast.

Volkswagen workers have the right under federal law to make a choice on union representation without intimidation, fear or coercion. That Haslam and other Tennessee officials used the power of their elected office to intimidate workers into voting against representation isn’t surprising. They receive millions of dollars in campaign contributions from the same anti-union groups associated with the Koch Brothers and Grover Norquist.

These groups will stop at nothing to ensure that working Americans hang on by just a thread, grateful merely to have a job, with no real opportunity to improve wages, benefits or health and safety.

But where does this “my way or the highway” approach to using our tax dollars stop? Would a governor such as Haslam offer taxpayer-funded incentives to a business, but only with the condition that it doesn’t implement certain environmental measures because the Koch Brothers oppose them? Would a state official offer incentives to a business to relocate, but only if it agrees to hire only people from a certain ethnic group or a certain gender?

But that’s really what happened in February in Chattanooga.

This opinion piece originally appeared in the April 3rd edition of the Detriot News.