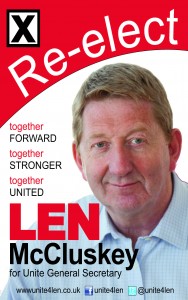 Over the next few weeks Unite members and activists will have the chance to nominate candidates and vote in the forthcoming election for General Secretary.

Unite’s current General Secretary, Len McCluskey, is standing for re-election. He has set out the reasons why in a Statement to the Executive Council and why the election should take place in 2013.

I intend to fully support and campaign for Len McCluskey’s re-election.

Here are the reasons why.

These challenges include defending our members jobs, pay and conditions, fighting for decent pay increases, and fighting for skills and apprenticeships to provide decent jobs. Its been harder because of the lack of any overall Government strategy to help manufacturing.

In all of these fights and campaigns, Unite members and officials have received the full support of Len McCluskey:

There are many other examples that didn’t make the headlines. But Len has supported the full use of the union’s financial, industrial, political and international strength to support members in dispute – wherever they are – in multi-nationals or in small and medium sized companies.

Under Len McCluskey’s leadership Unite has:

Unite was built on “three pillars” – Organising, International and Political. They are fundamental to our union’s structure.

Organising
Like many unions Unite’s membership has been hit by job losses. Len McCluskey has driven our 100% Organising campaign, across the union. This is building union strength where it is most needed – in the workplace. The result? 50,000 new members have joined the union – 17,500 manufacturing workers amongst them.

In addition Len has thrown his support behind organising campaigns, which have won union recognition and rights to information and consultation, building union membership.

Political
For too long  our members and activists have argued that we need more working people representing us in parliament, in local councils, in the Welsh Assembly, in the Scottish Parliament and in the Europe Parliament.

Under Len McCluskey’s leadership the process is underway to ensure we get more working class people into power to represent ordinary members and their families.

Using our political strengths Len has supported initiatives to get manufacturing back onto the political agenda. Remember how New Labour didn’t want to know about manufacturing until it was almost too late? With the pressure from Unite, manufacturing is back high on the the agenda. Politicians now want to speak to us about manufacturing, skills, apprenticeships and employment rights. The door is no longer closed.

Under Len McCluskey’s leadership of our union we have seen a re-structuring to ensure we function in the best interests of members, and Unite now has a ‘fit for purpose’ financial structure and legal service.

Len has also widened the involvement of our young members in the union; pioneered community membership; introduced a political “think tank” – and we are introducing a new credit union.

There is still much to do but I believe Len McCluskey has shown the vision and determined leadership to get the union moving forward – a union our members can be proud of.

That is why I am supporting Len McCluskey and will be for his re-election as General Secretary of our union.

Counterfire: Why we are supporting Len McCluskey – click here.

Download special leaflet on Len and Manufacturing by clicking here.