I am very sad to report the death this week of a good friend, comrade, trade union tutor, author and researcher Professor John Gennard, Professor of Human Resource Management at Strathclyde University.  John had been ill for some time. He passed away on January 11th.

Many print trade unionists will remember John with great fondness. He tutored training courses for FOC’s and MOC’s and union reps in the NGA, GPMU and later in Amicus. He was the author of the published histories of the print unions, the National Graphical Association, the Society of Graphical & Allied Trades and the Graphical, Paper & Media Union.

He also produced, for Amicus (now Unite), the definitive work on two centuries of Print and Papermaking Trade Unionism in the UK and Ireland. This work greatly contributed to the development of the ‘Printers Archive’, the permanent exhibition of the history of Print Trade Unions at the Marx Memorial Library in London.

He also edited for ten years ‘Employee Relations’ a journal which published articles on collective bargaining and employee and employer representation. During his editorship he placed the journal at the forefront of debates and discussions in human resource management and industrial relations and developed the journal’s International Editorial Advisory Board.

John’s areas of expertise included graphical unions and co-ordinated national and transnational bargaining and the role of human resource managers in strategic decision making. He was also a member of the Advisory Conciliation and Arbitration (ACAS) Panel of Independent Arbitrators. 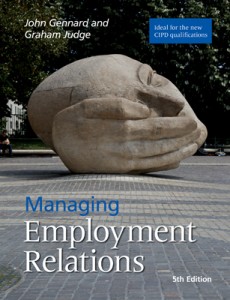 John was a great friend to the printing unions across Europe. He was respected by members and officials alike so much so that he was awarded the Gold Badge of the National Graphical Association.

Born in Manchester in 1944, John was also a dedicated Manchester United supporter, renowned for his detailed knowledge of the history of the club and its players.