Obama to sign FTA with Columbia – US unions reaction 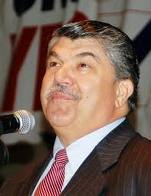 Following confirmation that President Obama is to sign a free trade agreement with the right wing regime in Columbia US unions have reacted angrily – with AFL-CIO President Richard Trumka stating: “We have no doubt that if 51 CEOs had been murdered in Colombia last year, this deal would be on a very slow track indeed.”

Full statement: “We are deeply disappointed that the Obama administration has signaled that it will move forward to submit the proposed U.S.-Colombia Trade Agreement to Congress for a vote in the near future. In our view, the situation in Colombia remains unacceptably violent for trade unionists, as well as for human rights defenders and other vulnerable populations. In addition, Colombian workers face enormous and indefensible legal and practical hurdles in exercising their rights to organize unions and bargain collectively.

We appreciate the efforts of the Obama administration to negotiate a separate Action Plan with the Colombian government to address some of the concerns we have raised over many years with respect to human and labor rights for workers, murders of trade unionists, and impunity for the perpetrators of violence. We understand that the proposed Action Plan lays out some important benchmarks in terms of increasing the level of protection for workers, addressing some flaws in the labor code, and improving enforcement of labor laws.

However, the Action Plan does not go nearly far enough in laying out concrete benchmarks for progress in the areas of violence and impunity, nor does it address many of the ways in which Colombian labor law falls short of international standards. There is no guarantee that the terms of it will in fact lead to a reduction in violence, and no backup plan to delay implementation if the violence and impunity continue. Furthermore, the Action Plan is a stand-alone agreement, not connected to the benefits conferred in the trade agreement. Once the trade agreement is ratified by Congress and implemented, the U.S. government will have no leverage whatsoever to enforce its terms in the event that the terms are not implemented as agreed.

The Colombian government has failed in enforcing the rule of law and protecting the safety of its citizens as they exercise their internationally recognized human rights to form unions and bargain collectively. These problems are deeply ingrained and longstanding, and they cannot be solved by commitments on a piece of paper. Concrete progress on the ground with respect to violence, impunity, and labor law reform needs to be demonstrated over a sustained period of time.

We are consulting closely with our union counterparts in Colombia and will continue to consult with the Obama administration about the terms of the Action Plan and its implementation. But, on the basis of the information provided to us at this time, we remain strongly opposed to the Colombia trade agreement”.