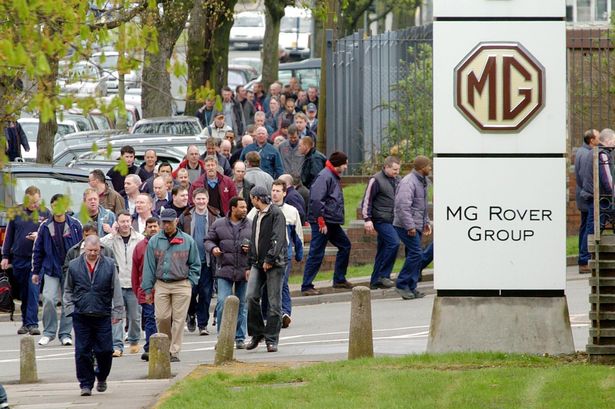 The Phoenix Four should still do the right thing. By directing the proceeds of the Deloitte fine to former employees, the FRC could show them an example, write Professor David Bailey and Richard Burden MP

Back in 2013, the ‘Big Four’ accountancy firm Deloitte was fined a record £14 million by the accountancy regulator the Financial Reporting Council (FRC) for failing to manage conflicts of interest in relation to its work as corporate advisers for companies involved with MG Rover.

Deloitte subsequently appealed against the findings, and last week over-turned some of the findings against them, notably in relation to the project grandly named “aircraft”. We now expect a revised fine against Deloitte to be calculated.

Deloitte was of course delighted by this, stating that it was “pleased that the findings of failing adequately to consider the public interest and deliberate serious misconduct have been overturned. We take such responsibilities extremely seriously and these findings were entirely unreflective of the integrity and values of our firm”.

That’s alright then? Well, no. Deloitte hardly covered itself in glory in the whole affair. Let’s note that the Appeal Tribunal upheld several findings of misconduct in relation to Deloitte’s work on ‘Project Platinum’, the project to dispose of Rover’s multi million pound loan book.

Deloitte grudgingly noted the latter in a rather terse statement that “we accept the tribunal’s findings that aspects of our client engagement processes could have been better”.

As the FRC notes, the Appeal Hearing found some significant issues of misconduct in this case concerning the need for accountants to act with objectivity. And the FRC is right to stress that the need for safeguarding and maintaining confidence in the accountancy profession and in upholding the standards expected of members.

On a practical level, it’s essential that the Institute of Chartered Accountants in England and Wales (ICAEW) sorts out its guidance for accountants on how they should do that. There would appear to have been some shortcomings from this accountancy body on this score.

Deloitte of course had spun furiously after the original FRC finding in 2013 to try to maintain the tenuous narrative that the way it behaved helped to generate value and to keep MG Rover going for five years. What utter claptrap. A £500 million dowry from BMW kept the firm afloat for five years, which bought time for the Regional Development Agency and the Government’s MG Rover Talk Force to help the supply chain and the West Midlands economy to adjust.

Those efforts were crucial to reducing the scale of job losses when MG Rover finally collapsed in 2005. Initiatives by the Rover Task Force also served as a model for helping many more firms get through the global financial crash that happened three years later.

Back at Longbridge itself, the workforce did everything that was asked of them to make MG Rover a success. But the firm slid downhill with ageing models and without finding a partner.

Over those five years MG Rover consumed what assets it had whilst the Phoenix Four (plus One) did a superb job of stuffing cash into their pockets before MG Rover went bust. They systematically insulated themselves from the consequences of impending failure while leaving their own employees’ jobs and pensions utterly exposed.

Remember that the Phoenix Four had set up Phoenix to buy the loss-making carmaker from BMW for a token tenner back in 2000, with MG Rover coming with a £500 million dowry from the German car-maker. The Four then set up a hugely complex financial structure, with advice. The four were able to move money around and extract value – to the tune of £42 million in salaries, pensions and other benefits for themselves.

The Phoenix Four didn’t face any criminal charges as the complex financial structure they set up to extract value before MG Rover collapsed was cleverly designed and within the rules. True, they were disqualified from being directors of any company for up to six years. But they kept the millions.

As for Deloitte, their fees for advising Phoenix were substantial. They still face the prospect of fines for their trouble.

So what about the workers? They lost their jobs. It was only thanks to a new Pension Protection Fund set up by the Labour government of the day that they were able to keep most of their pensions. Their own pension fund went down with MG Rover. And while many former employees later found work, our research showed many earning significantly less than when at MG Rover.

So we welcome the FRC’s diligent work, the original tribunal’s decision, and those findings upheld by the appeal. The work of the FRC is in essence the only substantive follow up to what was the biggest collapse in recent British business history.

But what we’d still like to see is some of the fine for Deloitte (whatever it turns out to be) going to compensate the workers and their families who lost out when the firm went bust. The Phoenix Four promised to set up a trust fund to do just that. It was another promise on which they did not deliver. The Phoenix Four should still do the right thing. By directing the proceeds of the Deloitte fine to former employees, the FRC could show them an example

In April it will be exactly ten years on from the closure. We shouldn’t forget the workers.