‘March of the Makers’ goes into reverse 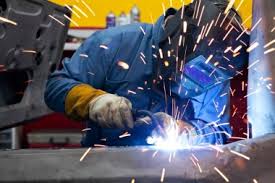 Whatever happened to the ‘March of the Makers’ and the much heralded rebalancing the British economy?

This year has so far been pretty dire for UK manufacturing. The sector’s growth was only a meagre 0.1 per cent in the first three months of the year.

And when the figures come in, we’ll probably see that manufacturing declined in the second quarter.

I say that as manufacturing output actually fell in April and May as the strength of sterling – now at a seven-year high – began to bite. Production was down 0.6% in May compared with the previous month, following a 0.3% fall in April.

Looking ahead, Markit’s purchasing managers’ index (PMI) – a forward-looking measure of confidence – fell to 51.4 in June. This was its weakest level for two years and down from the figure of 51.9 recorded in May.

This is still in positive territory (i.e. above 50) but well below expectations that it would come in over 52.

With manufacturing starting to act as a drag on the economy, growth is increasingly dependent once again on the UK’s dominant services sector, which accounts for as much as 80% of UK output.

So after all the talk of rebalancing, the UK economy – nationally at least – will depend on consumer spending to keep the economy moving.

Sterling, which on a trade-weighted basis is now at its strongest level since 2008, is increasingly being viewed by manufacturers as a big drag factor, according to surveys.

Only last month, of course, the Goodyear closure decision highlighted the strength of sterling.

The big competitiveness gains that we saw arising from the 2008/9 depreciation in sterling are now being unwound, making exports more expensive.

It also raises a question as to how much more steam there is in the re-shoring phenomenon.

The reshoring trend has seen one in six Midlands manufacturing firms bringing back activity to the region.

Reshoring, in part, reflected trends like the need for quick turnaround times and a desire to improve supply chain resilience and quality but a significant driver has also been a competitive exchange rate.

For several years now, UK manufacturing exports and output have been affected by ongoing economic weakness in Europe.

The recent Greek crisis aside, some green shoots are in fact now being felt in the Eurozone but ironically sterling’s strength against the euro increasingly seems to be constraining the ability of UK manufacturers to capitalise on the situation.

But, while the Chancellor had pinned hopes on an export led recovery, that is not materialising and the strength of sterling and uncertainty in Europe isn’t likely to change that soon.

As I’ve been saying for some time, manufacturing had a good 2014, but the ‘March of Makers’ stalled at the back end of last year. Since then, it has gone into reverse.

There had anyway been doubts over the durability of the UK manufacturing recovery, centred on fragility in key export markets, low levels of investment spending, concerns over the impact of high energy costs across the sector (on which the fall in oil prices earlier this years did help) and issues of skills and access to finance down the supply chain.

Add to this list of woes the strength of sterling. Little wonder that manufacturing has still not got back to 2008 levels of output.

Does this matter? Yes.

There is a renewed recognition internationally that manufacturing is important.

Those European economies with larger manufacturing sectors as a proportion of the economy weathered the 2008/9 global financial crisis and aftermath in better shape than others.

Indeed, some economists blame the lack of a vibrant manufacturing sector as a reason for the UK’s recent disappointing productivity performance.

It’s widely recognised that, in the run up to the global financial crisis, the UK economy had become unbalanced, relying too much on financial services and a buoyant housing market to drive growth.

Rebalancing was meant to address that so as to provide a more resilient economy.

Sadly, the last coalition government assumed simply that the exchange rate depreciation seen back in 2008/9 would deliver the manufacturing rebound that would rebalance the economy.

The danger was that this depreciation could anyway soon be unwound, as we are now seeing, and was anyway not enough.

As I’ve stressed repeatedly in blogs, we need much more than that.

For starters, we need a serious industrial policy that, for example, backs new technological ‘platforms’ which can stimulate other areas of the economy, provides accessible finance for small firms, backs high growth firms, supports investment and supports modern advanced manufacturing.

So far we’ve seen little sign – the auto industry excepted – of any serious industrial policy from either the last coalition government or the new Conservative one.

That, sadly, has been a key shortcoming in economic policy.