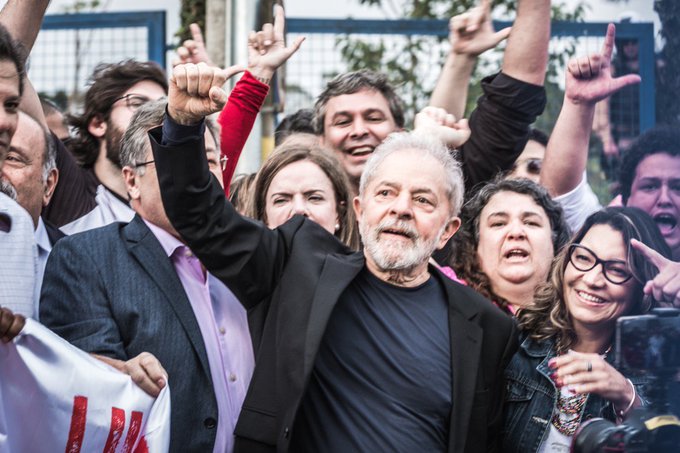 As Brazil’s far-right President Jair Bolsonaro’s domestic and international status continues to decline sharply, former president Luiz Inácio Lula da Silva is stepping up his campaign to win the presidential election that will take place in October this year.

Bolsonaro’s standing has been seriously damaged by his mishandling of the Covid pandemic that has killed more than 615,000 people, one of the highest death tolls in the world. The far-right president has also been losing support in the country for his neoliberal programme, including budget cuts and the privatisation of public companies such as Electrobras which produces 30% of the country´s power.

Over two-thirds of Brazilians polled in December said they did not trust the president, and a similar figure did not approve of the way he was governing Brazil.

Brazilians have been badly hit by a combination of rising unemployment and soaring inflation, particularly for foodstuffs, increasing both poverty and hunger in the country. This led throughout 2021 to a wave of demonstrations in major cities across the country against Bolsonaro, demanding his resignation.

Bolsonaro has also been accused by a Senate panel investigation of ten serious offences, including crimes against humanity, for his government’s chronically inadequate response to the pandemic. The inquiry uncovered evidence pointing to potential illegalities in the way that the Indian vaccine Covaxin was acquired for the government’s programme.

Although Bolsonaro refused to approve an investigation into the Covaxin deal, federal prosecutors subsequently opened a case on the contract, citing a number of concerns about how it was managed. Whether or not Brazil’s Prosecutor-General acts on the Senate report, which could lead to impeachment and criminal trials, Bolsonaro has been wounded politically by the six months’ long probe into his governing record.

Meanwhile, Lula, with his political rights restored in March 2021 after Brazil’s Supreme Court Judge Edson Fachin annulled the criminal convictions against him, has been building support for a run at the presidency in the autumn.

As well as taking a leading role in the anti-Bolsonaro opposition in Brazil, Lula has been seeking to restore Brazil’s standing abroad. Bolsonaro’s diplomatic isolation has been particularly affected by his cavalier attitude to the impact of deforestation of the Brazilian Amazon which has soared to a 15-year high.