Letter to The New Statesman 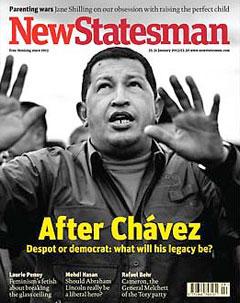 Over the past decade very few countries in the world, if any, have held more elections and referenda than Venezuela. The overwhelming endorsements for Hugo Chavez and his coalition of supporters in these underlines how his government is delivering for the majority unlike any other in Venezuela’s history.

One of the first acts of the Chavez government was to initiate a process to create a new constitution, with millions participating in its drafting and subsequent electoral endorsement and this bitterly opposed by a minority resistant to social change. At all times the Chavez government has defended this Constitution even when the right-wing opposition forces resorted to illegal measures including most notably, but not exclusively, a coup in 2002 when all democratic institutions were suspended and many killed.

Against the backdrop of the recurrence of Chavez’ cancer, and the enacting of constitutional provisions to delay the swearing in ceremony, opposition figures who backed the 2002 coup now falsely claim the government is violating the constitution. Venezuela’s Supreme Court as well as the Washington-based Organization of American States have rejected these claims which are clearly aimed at forcing new elections despite Chavez’s recent electoral landslide when he won a record number of votes.

We were disappointed therefore that your recent editorial falsely claimed that Chavez is ignoring Venezuela’s constitution. Furthermore, your call for Chavez to step aside regardless of whether his health improves flies in the face of the democratic wishes of Venezuela’s majority. Sadly in drawing these conclusion the New Statesman found itself inadvertently supporting arguments advanced by a small right wing, anti-democratic minority within Venezuela itself.”;