Len McCluskey on the Unite agreement with BA. 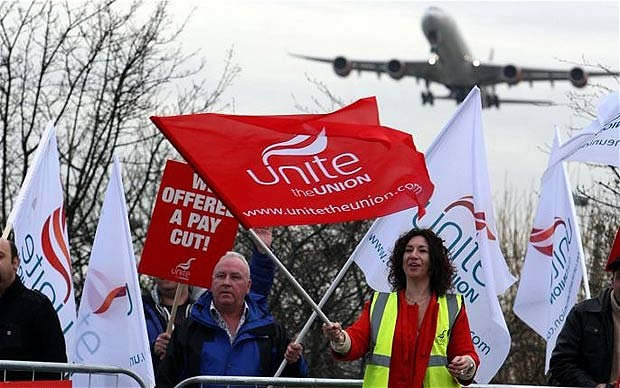 Unite General Secretary Len McCluskey has released the following statement on the agreement reached with British Airways, bringing to a conclusion the long running dispute. The statement has been sent out to all Unite activists following a meeting of the union’s Executive Council.

“Unite and British Airways have reached an agreement to resolve the dispute between us at the airline.

The agreement, which was ratified at a cabin crew branch meeting attended by some 2000 members last week, will now be subject to a full ballot of Unites 10,000 cabin crew members over the next month with a recommendation to accept. In the meantime, the union has decided not to call any further industrial action based on its present ballot mandate.

The long running dispute that has seen cabin crew at British Airways vote four times over two years for strike action and take 22 days of industrial action in 2010 alone, has been one of the most protracted in decades and one which had cost the company in excess of £150 million.

We are delighted to have reached an agreement that I believe recognises the rights and dignity of cabin crew as well as the commercial requirement of the company, its good news for BA, its employees and customers alike.

Under the agreement staff travel, the removal of which from striking crew led to further escalation of the dispute, will return with the signing of the agreement and implementation of the new structure that has been negotiated. The resolution to this matter paved the way for agreement on other matters in dispute including;

The past eighteen months have been a challenge to our union; industrially, legally, politically and publically. The challenge has both tested our organisation and the resilience of our membership while demonstrating the vile depths that our media barons will steep to in an attempt to demonise and undermine collective action in defence of working people. It is clear that the disgraceful messages being spewed out daily in the national press had some impact on the publics perception of this dispute and our objectives. Indeed, some of our own members will have had their concerns about the impact this dispute has had on our union and its wider public image. However, I want to be very clear in my response to this.

Unite’s cabin crew membership has voted in huge numbers and overwhelmingly, on four separate occasions over two years, in favour of strike action to defend their industrial agreements and trade union organisation.

Just like any other group of our members who face attacks, our members at BA rightly expected their unions support, upfront and passionate support that we have been very proud to have delivered standing shoulder to shoulder with them throughout. We would do likewise for you and in such circumstances you would rightly expect us to do just that.

The resolution of this dispute shows civilised negotiation has worked.

Even on notice of settlement some journalists appeared to be deeply confused. Surely this was a knockout victory for one party – one must have crushed the other? The reality is that it is an honourable agreement that addresses the concerns of both parties. It may have taken four ballots and twenty two days of strike action to get us here, but now we are here we can proudly reflect on a good job done.

Many thanks for all of your assistance and support over this difficult period”.