Learn the lessons of Wyndham Impact or history will repeat itself 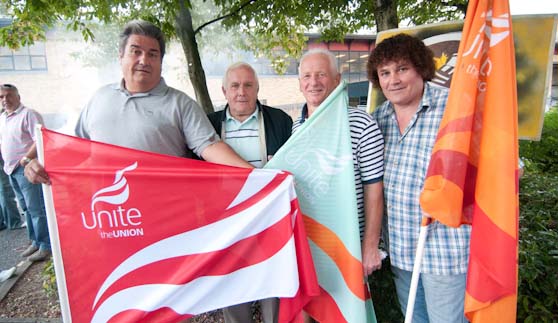 Unite members at Wyndham Impact - standing up to employers

A recent editorial in the important trade magazine, Print Week basically concluded that the reason for the proposed closure of the print company Wyndham Impact had nothing to do with the 20-week dispute that has taken place there, but was in fact because the company was not – and maybe never had been – a viable operation.

Unite National Officer Steve Sibbald challenged the editorial and his arguments explain why workers are now challenging employers across industry :

“It is important is to understand why a workforce, in a quiet Basingstoke backwater, with no political agenda or affiliation decided to stand up against a company for nearly six months (one of the longest disputes we have had in our sector) when they were fully aware of the risks such action posed to their livelihoods.

I won’t go into too much detail on the plight of the employees as it has already been well documented, but they were asked to take a pay cut almost two years ago because times were difficult for the company. They were also told that this pay cut would only be implemented for one year.

It is my opinion that the Wyndeham Group never entertained the idea of reinstating their original pay and, at the same time, a number of other basic working rights were being ignored. The cumulative effect was to generate a feeling of animosity within the workforce.

These employees were just ordinary people who loved working in print and whose main motivation was to go to work to enjoy a certain standard of living and to pay their bills.

What is without question is that they felt extremely aggrieved because of their treatment at the hands of the company, hence the many overwhelming decisions to keep the dispute going. Those grievances had been allowed to fester and build over a period of two or three years and the company has to bear full responsibility for allowing that to happen with no real attempt to address the many issues, which resulted in a workforce feeling helpless and even humiliated.

Of course, venture capitalists will never concern themselves with the justification or merits of any disagreement, they are only interested in the balance sheet. However, in this and many other cases, the balance sheet is severely affected precisely because those grievances are not addressed.

The lesson that other companies will, I hope, take from this episode is that it can be very costly if you do not treat your workforce fairly when making cuts and addressing business problems. Employees will only put up with so much. I think it is highly likely that there will be many more ‘Impacts’ as more and more workforces decide that they have had enough.

When the recession appeared on the horizon, companies were quick to say that cuts needed to be made in order to survive, that changes needed to be put in place to protect jobs. Employees are not stupid, they realise the need to adapt in difficult times, but there needs to be give and take.

There are ways of ensuring that the events at Impact are not repeated elsewhere through legal, credible structures which promote mutual trust. And if there is any employer that needs such structures, Wyndeham stands out as the favourite candidate.

Meanwhile, all employees in the industry should be grateful for the stand that our members took at Impact, it sends a clear message to all employers, and I just hope they listen.”