John Monks – Don’t give up on Europe 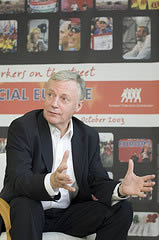 Europe, like the UK, is in trouble, or at least Ireland and the Mediterranean countries are. The debt-fuelled boom of the early years of this decade has turned into a comprehensive bust. Many huge banks, with the Royal Bank of Scotland to the fore, borrowed money to lend on, traded in complex derivatives based on shaky mortgages in the USA, and raced each other to become the biggest beast around.

In 2008 the bubble burst and most of our banks were in big trouble. Governments, led by Gordon Brown, at first did the right thing. They stabilised the wobbly banks albeit at great expense to the tax payer. They kept up spending which resuscitated the economy. They ran up large debts – they had no choice – and much of that debt was transferred from the incontinent banks.

Ireland and Iceland were early casualties, too small to save their feckless banks, and Greece soon followed, with the added problem that its then government had lied about the true state of their economy – aided and abetted by the creative accounting of Goldman Sachs and Deutsche Bank. All these big banks have a lot for which to answer.

Since then the crisis has switched from the banks to the weaker economies. They have had to be ‘rescued’ by the EU and IMF, which have provided loans in exchange for austerity. The ETUC has never believed that this formula will work. It is not working in the UK where the government are cutting too much too quickly. And it’s not working in Greece, Ireland and Portugal.

The ETUC, which I have just left has been arguing, and demonstrating, for a European wide approach based on the generous principles of the Marshall plan. Punishment by austerity did not work after the First World War and it won’t work now.

We need the strong to help the weak, at work, in society and in Europe. We need a different economic system which is based on encouraging enterprise to add value and not just extract it as is done currently by too many directors and senior executives. We must follow the route taken by the other Northern European economies, building the social market, with strong collective bargaining, excellent education and training, high class welfare states and public services and more equal societies – a Europe for the workers, not a Europe for the financial cavaliers who have been so reckless with your money and mine.

Too many people seem to think that Europe is a flop. I accept there are many current problems, but the societies which have been built in the Nordic countries, Germany, the Netherlands and elsewhere are not flops but very successful and admirable examples which we should follow. They are not in extreme difficulty as we are and it is time that the UK committed itself to following their example. It is time trade unions looked further ahead and set our course for these kinds of societies.