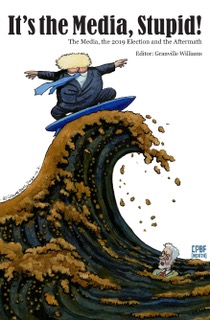 This new book  – with pungent cartoon cover by Steve Bell – revisits media coverage of the 2019 general election, with detailed case studies of the way different sections of the media reported it.

‘It’s the Media, Stupid! The Media, the 2019 Election’ and the aftermath provides powerful evidence of the partisan media coverage of the election.

One chapter, written by the Loughborough University election survey team, is meticulously researched and provides the data to support the level of hostility against Labour.

Another stand -out chapter supported by extensive illustrations is ‘The Vilification of Jeremy Corbyn’ by former BBC Industrial and Political Correspondent Nick Jones.

There is also a chapter by Unite National Officer for the Graphical, Paper, Media and IT Sector Louisa Bull on the restructuring of the media and Unite AGS Tony Burke (a long standing supported of the CPBF since the late 1970s in the NGA and GPMU) and now Media North  which argues strongly that trades unionists need to be aware of the important role of the media in past elections and trade union reporting and its impact on working lives.

The book has a foreword by Professor James Curran and other contributors are Tony Harcup, Pat Holland, Tim Gopsill, Professor Julian Petley and Tom Mills.

The recent controversy sparked by the BBC Panorama programme, ‘Has the government failed the NHS?’, broadcast on Monday 27th April 2020, reminds us of how often the BBC was in the firing line during the 2019 general election.

The Panorama programme was attacked by papers like the Daily Mail and daily Telegraph and Tory MPs called for the matter to be considered by Parliament. Andrew Griffith said: ‘The taxpayer-funded BBC has real questions to answer about its role here.’ Richard Holden added: ‘The level of bias being allowed at a time of national crisis is shameful.’

Finally the culture Secretary Oliver Dowden made a formal complaint about the programme to the BBC Director General Tony Hall.

It was a reminder of the flak fired at the BBC during the election campaign, and, after a brief lull during the BBC’s coverage of the COVID-19 pandemic, a hint that the latent hostility within the Conservative party towards the BBC is still there.

The book’s editor, Granville Williams, is clear about its purpose and relevance. “The book grew out of the experience of MediaNorth producing six issues of ElectionWatch during the election,” he said. “Even though the election seems a distant memory we still need to remember how the media responded and learn the lessons for media reform in the future.

“Our work examining media coverage of the Covid-19 pandemic in two MediaNorth specials shows that many of the patterns of behaviour we saw in the election are sadly being repeated during the current crisis and the government is escaping scrutiny because of the diversionary tactics of the popular press.”

The book can be purchased directly from:  http://coldtype.net/MediaNorth.html