It’s even worse than was thought

The latest GDP release from the Office For National Statistics was accompanied by a set of revisions to previous data. These now show that the downturn was more severe than had previously been estimated and that the British economy is even further away from recovery.

Previously, ONS data had shown that six years into economic slump the economy was still 2.6% below its pre-recession peak in the 1stquarter of 2008. Now it shows that the economy is actually 3.9% below its peak.

The economy is still £61bn below the peak level. Yet it remains the case that the fall in investment more than accounts for the entirety of the recession, as shown in Fig. 1. Investment (Gross Fixed Capital Formation) has fallen by £68bn. The other main component of GDP which has contracted is household consumption, which is down by £28bn. This demonstrates the effects of falling real wages on living standards. It effectively accounts for half the recession, but it is not as severe as the decline in investment.

By contrast government spending is £20bn higher, despite all the propaganda about the absolute priority of deficit reduction. This is because government policy is not primarily aimed at curbing spending at all, otherwise PFI, Trident and subsidies to corporations would all go. The aim is to boost profits, which means cutting wages, cutting government investment in areas where the private sector can return profits and redirecting the social surplus towards capital. 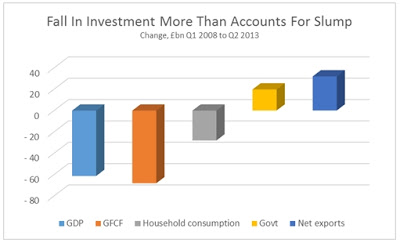 Net exports are also £32bn higher. The government and its supporters are inclined to blame Europe, or foreigners in general for their own failed economic policy. It should be noted that the rise in net exports has very little to do with the increased sale of goods and services overseas. Despite a very large devaluation for Sterling exports are only £6bn higher at the beginning of 2013 than at the beginning of 2008. By far the larger component of the rise in net exports has been the fall in imports, down £26bn over the same period. It seems that both households and firms in Britain are being priced out of world markets. It should be clear from the much greater fall in imports that it is Britain which is a drag on the world economy, not vice versa.

In fact the British economy has been one of the worst performers in the G7, which itself has performed very poorly. As a whole the G7 economy is just 1.1% above its pre-recession peak at the beginning of 2008. The British economy’s performance still 3.9% below its prior peak placing it in the rear of the G7, on a par with Japan and ahead only of Berlusconi’s Italy. 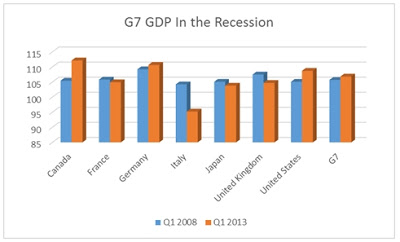 The slump has been followed by stagnation. The effect of the downward revisions to GDP is to increase the gap between the economy’s previous trend rate of growth and its current level. As a result the economy is already nearly 20% below its previous trend rate and even on official forecasts that gap is set to widen over the next period. The economy is about £350bn below its previous trend. This gives a measure of the scale of the crisis facing an incoming Labour government, which cannot be remedied without a commensurate level of investment in the economy. 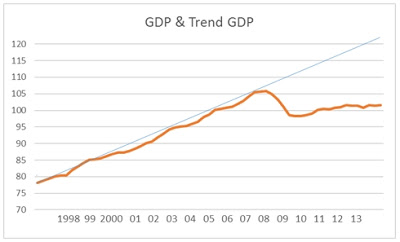 The Tory-led government has no intention of increasing investment. The much-hyped infrastructure investment plan was entirely fake. As the chart from the Institute for Fiscal Studies reproduced below shows, government investment is being cut. 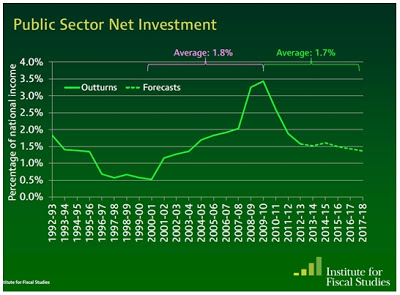