Is the government finally ‘getting it’ on industrial policy? 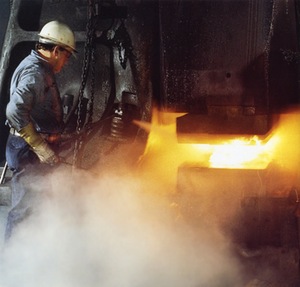 “Over the last eighteen months or so the coalition government has been really straining every sinew to seek to rebalance the British economy and put manufacturing at its heart.”

That’s stretching it a bit. But there has been a change in attitude in government in recent months and that change could not have come too soon.

Elsewhere in his speech Nick Clegg was right to question the values we’ve been teaching our children for so long.

As he said, we’ve overvalued services and undervalued manufacturing; we’ve put more stress on, in his words: “Making bets behind a computer screen in the Square Mile rather than inventing and building and exporting things.”

The deputy prime minister was also right to say that we’ve stressed university degrees at the expense of vocational qualifications.

And our favourite thing that he said last week: “We’ve bought in to the myth that our industrial decline is somehow inevitable and unstoppable and that the new world will always trump the old world in manufacturing.”

To paraphrase a once popular saying, we agree with Nick!

Vince Cable, the business secretary, was also frank in his assessment that successive governments have not used procurement to support British industry and that this needs to be addressed and reviewed in order to defend UK manufacturing.

So what is to be done? During questions, as the sole representatives of the trade union movement we told Nick Clegg that it wasn’t enough to fiddle around at the margins. Reducing workers employment rights, in the name of flexibility, is not a growth policy. Nor are rehashed youth opportunity schemes and 1980s style enterprise zones.

Instead, we recommended he read the TUC’s recent policy paper, German Lessons (and for good measure, we took some copies of German Lessons and Unite’s 2020 vision manufacturing strategywith us and liberally sprinkled them around ministers, their officials and employers – both documents were well received).

It was made clear that we needed to enthuse more young people, their parents and their teachers to look at a career in manufacturing. We need top quality apprenticeships and we must protect and promote the UK brand.

Much has been said about Germany’s ‘mittelstand’ of medium sized companies, which are sometimes called the backbone of the German economy. We need to grow strategic small companies into medium sized firms, capable of supplying large, world class exporters but also exporting in their own right. As a first step, of course, we need more bank lending to SMEs.

The TUC said earlier this month that Project Merlin had failed to live up to its low expectations and this is a real issue that must be addressed. Indeed at a session on financing, many small companies and their federations were highly critical of the lack of support from their banks.

Most of all, we need to understand that, contrary to the UK’s blind faith in the power of the market, there is a case for robust government intervention to support our strategic sectors.

But despite all that, there was a view that Nick Clegg and Vince Cable might just be “getting it”. The fiasco at Bombardier, the job losses at BAe Systems, and the inability to win the Indian Air Force fighter plane contract have shook them.

Of course, the Treasury holds the purse strings and the spending cuts risk making support for industry, in order to rebalance the economy, impossible. So George Osborne and David Cameron need to get it too. And if they can get it before next month’s budget, that rebalanced economy they talk about might even be possible sooner rather than later.