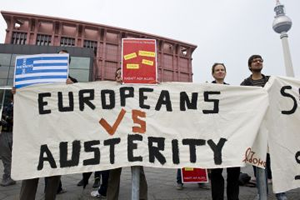 The European Trade Union Congress in a report issued this week has warned of the impact austerity policies are having on pay across the European Union.

Bernadette Ségol, ETUC general secretary, said such policies will not solve ‘competitiveness’ problems especially in those countries subject to ‘financial bailout schemes’ such as Greece, Spain, Portugal, Ireland and Cyprus.

She warned that: “On the contrary, it aggravated existing problems, by affecting the most vulnerable and it risks undermining further the already fragile citizens’ support to the European project”.

The European Trade Union Institute (ETUI) has unveiled a visual map comparing wage developments in the European Union between the year 2000 and 2012, which illustrates the dramatic impact of austerity policies on wages and pay across the EU.

There is now an urgent need for a change of direction to restore growth and confidence otherwise European leaders will lose support for the European project.

The ETUC says that with just ten months to go before the EU elections growing wage inequality, austerity, cuts in benefits and mass unemployment are a “dangerous mix for citizens”.

Since 2007 the impact of austerity measures, the attacks on collective bargaining in some European countries and the imposed race to the bottom in the EU has seen a massive growth in unemployment, with more than 26.5 million people out of work and those who do find work placed in short-term, agency or zero hours jobs.

Youth unemployment in some countries stands at over 50 per cent – feeding toxic anti-EU rhetoric and the rise of right wing parties committed to attacking trade unions, collective bargaining and democracy itself.

The ETUI’s ‘Benchmarking Working Europe’ report demonstrates that, in the majority of countries where unemployment is increasing, salaries are also rapidly falling, with serious consequences in terms of growing poverty and social exclusion for European citizens.