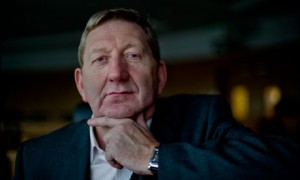 From the Guardian December 20th

The UK faces the prospect of widespread and co-ordinated industrial action in the new year, with the leader of the largest trade union today warning that it is “preparing for battle” with the government over its “unprecedented assault” on the welfare state.

Len McCluskey, the newly elected leader of Unite, says union leaders will be holding a special meeting in January to discuss a “broad strike movement” to stop what he described as the coalition’s “explicitly ideological” programme of cuts. Writing in the Guardian, McCluskey praises the “magnificent student movement” that has seen tens of thousands of young people take to the streets to protest at the government’s plans for post-16 education, saying it has put trade unions“on the spot”.

“Their mass protests against the tuition fees increase have refreshed the political parts a hundred debates, conferences and resolutions could not reach,” he said.

McCluskey, elected Unite general secretary last month, said trade unions had to work with students to build a wider anti-cuts campaign: “The magnificent students’ movement needs urgently to find a wider echo if the government is to be stopped.

“While it is easy to dismiss ‘general strike now’ rhetoric from the usual quarters, we have to be preparing for battle,” he said. “It is our responsibility not just to our members but to the wider society that we defend our welfare state and our industrial future against this unprecedented assault.”

The Unite leader’s intervention comes as the prime minister is preparing for a key meeting with union leaders today. David Cameron has invited leaders of the biggest unions in the country as well as the TUC for Downing Street talks, although a spokesman for No 10 would not confirm this last night.

McCluskey is believed to be among those invited, but in a hard-hitting intervention in today’s Guardian that puts Unite and its members at the forefront of the anti-cuts campaign he:

• Praised Ed Miliband for drawing a line under the party’s Blairite past but called for a clearer alternative to the coalition’s “austerity frenzy”.

• Said student protesters have been treated as the “enemy within” in a similar way to trade union activists on picket lines in the 1970s and 1980s.

• Said the trade union movement must not be paralysed by “anti-union laws” introduced in the 1980s.

• Called for a rebuilding of confidence in working-class communities that are likely to be the hardest hit by the government’s plans.

• Accused the Tories of whipping up “austerity frenzy” in an attempt to complete “Thatcherism’s unfinished business”.

McCluskey’s comments come amid a growing anti-cuts movement in the UK and across Europe, with strikes taking place in France, Spain and Greece.

In the UK this weekend protesters against corporate tax avoidancestaged demonstrations in more than 50 towns and cities – under the banner of online campaign group UKuncut – arguing a government clampdown could bring in an extra £25bn in tax, greatly reducing the need for spending cuts.

Student leaders, who have organised four national demonstrations and scores of sit-ins to protest about the rise in tuition fees and the scrapping of the education maintenance allowance, are already preparing a fresh wave of protests and demonstrations in the new year.

McCluskey said the meeting in January had been organised by the TUC and would be attended by leaders of the UK’s main unions. He said one of the first tasks was to “reach out” to the student protesters.

“Students have to know that we are on their side. We must unequivocally condemn the behaviour of the police on the recent demonstrations. Kettling, batoning and mounted charges against teenagers have no place in our society.”

Police arrested more than 180 people during the recent wave of protests and released more images today of protesters from 9 December who are suspected of disorder. Last week the home secretary, Theresa May, condemned the violence saw protesters and police injured, and blamed an “organised group of hardcore activists and street gangs”.

However, McCluskey said: “It is ironic that young people have been dismissed as apathetic and uninterested in politics – yet as soon as they turn out in numbers they are treated as the ‘enemy within’ in a way instantly familiar to those of us who spent the 1970s and 1980s on picket lines.”

Unite has signed up to the Coalition of Resistance campaign group which brings together unions with local anti-cuts campaigns across the country, he said, adding that the challenge was now to persuade people that there is an alternative to the cuts.

“Unless people are convinced not just that they are hurting – not hard to do – but also that there is a coherent alternative to the Cameron-Clegg class-war austerity, then getting millions into action will remain a pipe dream.”

He praised Ed Miliband for “drawing a line under the party’s Blairite past”, but called for a clearer dividing line between Labour and the government based on a “positive growth and tax justice programme” to tackle the deficit.

“A key part [of the alternative] must be a rejection of the need for cuts. ‘What do we want? Fewer cuts later on’, is not a slogan to set the blood coursing.”McCluskey said the TUC’s national demonstration on 26 March would be a “critical landmark” in the campaign against the government’s plans