Has Germany Scuppered CETA? Is TTIP Next? 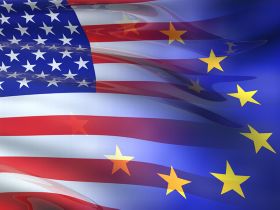 Reports from Germany and Canada suggest that the free trade agreement between the EU and Canada known as the Comprehensive Economic and Trade Agreement (CETA) could have been blocked by a change of heart by Germany as confusion reigns on the issue of the clauses related to Investor-State Dispute Settlement (ISDS). These concerns are increasingly shared by unions around the world, and even the EU Commissioner due to take over trade negotiations appears to oppose ISDS.

In the UK there is now clear opposition to CETA and the EU–US trade deal (the Trans-Atlantic Trade and Investment Partnership, known as TTIP) from trade unions with the TUC now wholly opposed to these trade deals. Opposition is growing across Europe, the USA and Canada.

In the UK the focus has been, understandably, on the effect that TTIP will have on the NHS and public services – open to take-overs by powerful US companies and corporations, with no ability by a future government to reverse those takeovers. Investors would be able to appeal to the secret tribunals provided for under ISDS and sue national governments if they feel they have been disadvantaged or their profits and operations affected in any way. Opposition in the EU is also focusing on the ISDS provisions and on the issue of labour rights – which also looms large in the USA.

The final text of the CETA agreement was due to be ‘initialled’ by officials at a Canada-EU summit in Ottawa on Friday, but in an interview with the Globe and Mail newspaper a senior German official Uwe Beckmeyer said sections of the deal – notably ISDS – must be changed before Germany would support the deal. Mr. Beckmeyer, who is Parliamentary State Secretary for Germany’s Ministry of Economics and Energy, confirmed the position after meeting with Canadian Trade Minister Ed Fast on 25 September.

Germany’s position (if confirmed) will scupper the CETA deal – especially as EU Trade Commissioner Karel de Gucht told a German newspaper that reopening CETA would mean “the deal is effectively dead”. According to the Globe and Mail Mr. Beckmeyer responded by saying: “I think that’s fundamentally wrong” – but he went onto say that CETA must not tie the hands of the German government to set policy.

“We believe it must remain possible for national governments to act, to enact legislation in the future, and the agreement cannot undermine that. We cannot just be forced to accept that, thrust down our throat.”

Although Beckmeyer said Canadian officials were open to further changes, Canadian government sources insisted that negotiations were over.

During the same week an announcement was made jointly by the German trade union federation DGB and the German Economy ministry, which appeared to oppose the ISDS clauses in free trade deals including CETA and TTIP (full English text awaited). The German Economy Ministry and DGB appear to oppose investor protection clauses and investor-state arbitration, according to a document which also says the DGB and the ministry support TTIP provided it doesn’t undermine Germany’s long established system of co-determination and employment relations, which reserves board seats for worker representatives, works councils, rights to information and consultation, and collective bargaining.

These are important issues especially for US unions who rightly argue that US workers should enjoy the same rights to information and consultation and seats on European Workers Councils where US companies are required to have them in the EU. The joint paper says:

“Investment protection provisions are generally not required in an agreement between the U.S. and the EU and shouldn’t be introduced with TTIP. In any case, investor-state arbitration and unclear definitions of legal terms such as ‘fair and just treatment’ or ‘indirect expropriation’ must be rejected.”

A DGB insider explained that, in relation to CETA, Germany believes that investment protection is not necessary as both Germany and Canada have strong legal systems; the protection levels offered in CETA would be significantly lower than that under German and EU law; the results of the EU’s public consultation should be taken into account; and the chapter on investment protection in its current form as of 12 September is not acceptable and the German Government can’t agree with the ISDS provisions in CETA.

Adding to the confusion, Commissioner de Gucht’s successor, trade commissioner-designate Cecilia Malmstrom, suggested on 27 September that she wanted to exclude ISDS from TTIP. This sent EU officials scrambling to retrieve the situation saying that the document saying this – her written response to pre-ratification questions from the European Parliament – was the “wrong text” of a draft and that it would be corrected in the final version. Commissioner-designate Malmstrom deleted some tweets on the issue in the confusion.

A German member of the European Parliament posted the text on his website, and the commitment has already been welcomed by the Socialists & Democrats Group in the European  Parliament (to which Labour belongs.) In the answers Ms. Malmstrom quotes Commissioner President Jean-Claude Juncker as saying that no limitation of the jurisdiction of courts in EU member states would be accepted in the new transatlantic trade agreement.

“This clearly means that no investor-state dispute settlement mechanism will be part of that agreement. I fully support this approach of the President-elect (Juncker) and will work in this sense in the negotiations.”

In Austria the parliament last week voted to oppose CETA, citing ISDS clauses, the lack of strong employment rights and support for ILO Conventions and the potential for multi-national corporations to take over public utilities. As one opposition group said “It’s a beginning!”

CETA is facing union opposition on both sides of the Atlantic – the global union Workers Uniting formed by the United Steelworkers in the USA and Canada and Unite in the UK and Ireland issued a statement condemning CETA in particular ISDS. USW Canadian national director Ken Neumann said: “ISDS is bad news for Canada. Under NAFTA (the North American free trade deal struck in 1994) we currently face $6 billion in lawsuits from American multinationals. If CETA is approved, that number will increase exponentially.”

Len McCluskey of Unite said: “The Tory government in the UK is hell-bent on privatising our National Health Service. If that happens, CETA locks in the privatisation. If a Labour government reverses it, then the private companies can sue the government for damages. We would no longer have democratic control over our economy or our public policies.”

And Steelworkers President Leo Gerard said: “CETA sets a terrible precedent for future trade agreements, especially the Trans-Atlantic Trade and Investment Partnership (TTIP) between Europe and the US. In addition to the deficiencies we have cited in the CETA – which will likely be replicated in the TTIP – the attacks on labour rights in the US threaten the living standards of European and Canadian workers.”

Meanwhile the Australian Manufacturing Workers Union has said it strongly opposes a deal between Australia and Korea – which is being supported by the Australian Government and the Australian Labour Party. AMWU National Secretary Paul Bastian said that that KAFTA was “an appalling agreement that strips away local jobs and Australia’s sovereign rights. We are deeply disturbed that both sides of politics are supporting this dangerous agreement”.

AMWU is also opposed to ISDS clauses and the fact that KAFTA allows for imports from North Korea which is notorious for forced and prison labour.

The fiasco over CETA and TTIP looks set to run. However more European, US and Canadian unions are expressing opposition to these trade deals. There are now over 100 campaigning organisations expressing outright opposition to CETA and more governments are being forced to re-examine the proposals and take heed of public concerns. Let us not also forget also that there is growing skepticism about the number of jobs that the deals are purporting to create on both sides of the Atlantic. The jury is out on the widely ranging number of jobs which could be created in advance manufacturing sectors such as automotives, aerospace, chemicals and in the creative industries.

It looks like momentum is now building against the ‘turbo charged capitalism’ which will be created by CETA and TTIP.

This blog first appeared on the TUC’s Touchstone Blog Site.