Global union network formed to fight back at Huhtamäki 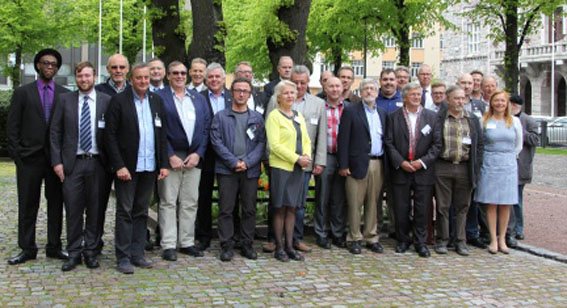 Unions from paper products plants owned by the Finnish multi-national Huhtamäki met in Helsinki recently to establish a global trade union network. They also slammed the behaviour of the company Vice-President, Sami Pauni, who refused to answer questions from US workers and walked out of the meeting with union reps from across the globe.

There are currently a number of disputes between at Huhtamäki’s packinging operations, in countries including India, Turkey, and the United States.

Participants at the global network meeting spoke about bad relations between management and unions within the company. Union representatives have no right even to enter the factory, and in many countries health and safety rights are violated frequently.

Workers at the Commerce, California plant faced harsh working conditions with temperatures often reaching above 40 degrees Celsius. When they decided to organise  the company refused to meet with them and brought in anti-union consultants who held mandatory meetings urging workers not to unionize.

Pauni gave a brief presentation on the company situation. However, after a question on why Huhtamäki spends a lot of money to fight the unions instead of establishing social dialogue with them, he became annoyed and left the meeting.

Commerce worker Levi Ross, who participated in the global network meeting on his holiday time, said on the incident: “I came all the way to Finland hoping to have a serious dialogue with the company, but I feel like they turned their back on me and the workers in Commerce”.

Jon Geenan International Vice President at the United Steelworkers in the US said: “Huhtamaki, shame on you for sending a senior company official to a meeting who would show such blatant disrespect for American workers by his stated refusal to take questions from Americans. The same Americans who buy your products when they buy Ben and Jerry’s ice cream, who use your products when they eat at Chipolte, use the cup and food carriers at McDonalds, use Chinet plates etc. and in this case, the same Americans who are your employees who make the products.

“Your demonstrated willingness to adopt the customs and laws, no matter how exploitative, in the nations where you operate when it comes to workers rights to organize brings great shame on the historic legacy of the Huhtamaki family and tradition.

“Yet we remain committed to a dialogue, a real dialogue, to discuss the right of free association, and hear your justification for the enormous expenditures that Huhtamaki is making to prevent workers from organizing. This human right we cannot back away from, because it doesn’t only affect organizing in America-it affects workers in most nations where Huhtamaki does business. Some in which slave labour is still perfectly acceptable.

IndustriALL Global Union general secretary Jyrki Raina said: “This meeting was only the first step in the fight to restore the rights of the workers and trade unions at Huhtamäki plants. The struggle will continue as long as the owners of the company will not agree to respect the workers’ rights and start a serious dialogue with their unions.

The participants of Huhtamäki Global network meeting adopted a statement, proposing steps to improve conditions for Huhtamäki workers and establishing a dialogue with management.