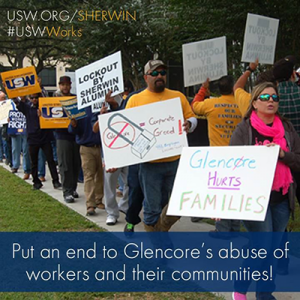 Glencore, the global mining company, claims to respect human rights, community culture, collective bargaining and the right of employees to freely choose a union. But Glencore’s practice is far different from its rhetoric. It is engaged in extremely poor labour practices across the world.

In the United States, management at Glencore’s Sherwin Alumina plant in Texas has locked out 450 members of the United Steelworkers (USW) since October 11. Glencore is demanding drastic concessions, including stripping retirees of health care benefits and denying a secure retirement to the next generation.

In South Africa, 800 workers at the Koornfontein mine in Mpumalanga went on strike on October 17 to protest substandard severance payments. Glencore offered one week of service per year in this mine and in other operations it is paying three weeks. Workers in Koornfontein not only have to deal with losing their jobs but also an unfair settlement for the many years they produced coal for Glencore.

In Peru, workers at Antamina mine, on strike since November 10, are subjected to health and safety violations on a regular basis and are being denied fair payment for bonuses and overtime. Workers are being excluded from the Miners’ Pension Fund and the company routinely violates the collective bargaining agreement.

Please sign EDM 764 against Glencore’s appalling treatment of its employees, and urging them to end the lockout of workers in the Sherwin plant.