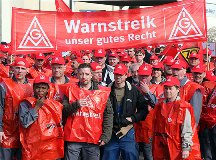 Warning strikes in the German metal working, engineering and electronic sectors will broaden this week with the break-down last week of third round of bargaining between IG Metall and employers’ associations in several states.  Upon expiration of a labour peace accord on 28th April, 2,500 German metal workers began the warning strikes at select locations.

Talks for 3.6 million German metal workers represented by IG Metall began in several states in late winter. Bargaining was stalemated in the last state talks, on 26th April, after employers put forth a less than satisfactory salary offer. They also refused to agree to union demands assuring full work guarantees for apprentices once their training tenures are over and more job rights for contract and agency workers.

The offer put forward by employers’ association Gesamtmetall through its state chapters on 24 April was termed “a provocation” by IG Metall, thus causing mobilisation over the weekend when the peace accord expired. The proposal saw employers offering a 3% increase over 14 months, of through June 2013. The union is seeking a 6.5% pay rise over 12 months.

The union’s claim is based on improved productivity, as well as projected inflation in 2012 and 2013.

German industrial workers are the driving force in a nation that is Europe’s biggest industrial power and strongest economy, with high pay and workers’ savings driving the economy.

Last weekend’s warning strikes began on 28th April in the eastern city of Zwickau in Saxony. Other demonstrations over the weekend occurred in Bavaria, Berlin, NorthRhine-Westphalia, and Nordenham in northern Germany, where workers from several plants held protests on Sunday morning.

In Ingolstadt in Bavaria, some 80 apprentices gathered the night before and flashed a light-projector against the wall of a factory expressing their demand for job guarantees.

Workers from a TDK factory in Munich held a torchlight parade that same night, and autoworkers from a Daimler Mercedes-Benz plant in Rasiah, Baden-Württemberg state, protested on Sunday. The actions continued on 30th April with loud protests in cities and streets near a Daimler Mercedes-Benz factory in Wöerth-am-Main in Rheinland-Pfalz, at a MAN diesel plant in Augsburg, in Baden-Württemberg in Bavaria, where lead talks will resume on 8th May.

On May Day in Hamburg, IG Metall President Berthold Huber pledged that the union will not be deterred from its agenda, and will bring the dispute into June if employers do not adhere to union demands. If upcoming talks do not produced the desired results, IG Metall is planning continuous strike actions commencing on 16 May.

Besides a number of further warning actions today, mass demonstrations on 3rd May, are set at an Audi factory on Neckarsulm and a Porsche plant in Stuttgart. Some 900,000 of the 3.6 million workers affected are employed by Germany’s primary auto-makers.

This entry was posted in European Trade Unions, Media, Solidarity, Unite The Union. Bookmark the permalink.