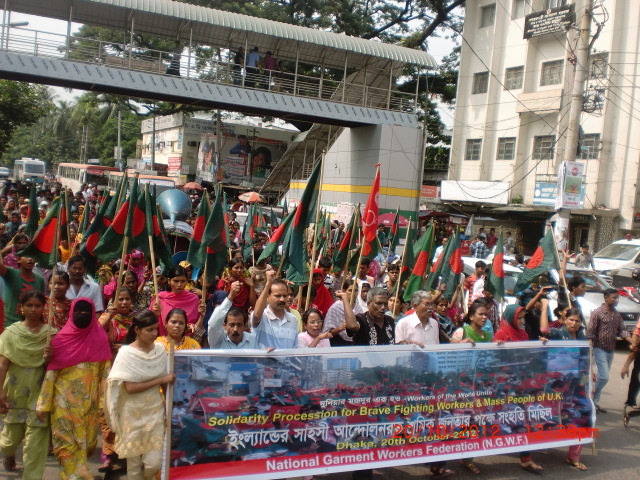 The following message of support was sent to Unite – for fighting workers and people of England.

Workers, trade unions and general masses of the UK are holding day-long protest demonstration today, October 20, all over the England to protest against austerity measures of the Government. Workers and general people of the UK are being seriously affecting austerity policy of the Government since it has drastically cut peoples’ welfare funds, education & health expenditure. The British Government also withdrawing subsidy and public responsibility from these sector. Thousands of workers are losing job from Government establishment and service sector as a result of lending these to private sector under so-called formula of reducing public responsibility. Today’s demonstrations is being held to protest against this policy.

A garment workers solidarity rally and procession held in Dhaka City today expressing solidarity with the demonstrations of British workers and general people. The programme was held in front of the National Press Club at 12:00 noon. Several hundred Garment workers, holding red and green Bangladeshi national flag, took at the rally and procession that concluded at Paltan Crossing after parading through Supreme Court, Foreign Ministry and Topkhana Road.

Expressing solidarity with the fighting workers and people of England, the speakers said: “Millions of workers are being thrown out of jobs throughout the world through privatization. State is withdrawing its responsibilities and subsidy from fundamental areas like food, education, health and housing in the name of austerity. On the other hand, Government are giving different incentives, including tax exemption to the multinationals. “

In this situation, the speakers said, “ Workers, working people, trade unions and general masses of the world should have to build united protest and resistance.”