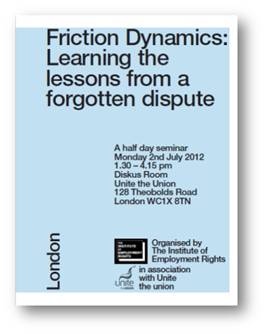 On Monday, 2nd July the Institute of Employment Rights will be holding a special half-day seminar  at Unite’s Central Office in London – between 1.30pm and 4.15pm on the Friction Dynamics Dispute.

Described as “the forgotten dispute” in 2002 an employment tribunal in Liverpool announced that 86 workers dismissed by their former employer, US owned Friction Dynamics Ltd, a car parts manufacturer in North Wales, had won their claims for unfair dismissal. The workers had been sacked for taking strike action in defence of their terms and conditions of employment and the recognition of their union, TGWU (now part of Unite).

But the tribunal victory was next to worthless.

Their jobs were lost. No reinstatement orders were issued because the employer went into administration. Despite the company starting up again some months later as Dynamex Friction, the insolvency of the original employer meant that the workers only recovered their basic awards – money that came from the taxpayer not from the employer.

Nevertheless, the workers remained on strike and on picket duty for two and a half years – making the strike the UK’s longest running workplace dispute.

In this, the 10th anniversary year of the tribunal decision, the IER will  discuss the implications of the dispute; the lessons to be learned for today and how and in what ways the law has changed, if at all, over the past 10 years.

Friction Dynamics exposed the weaknesses in the UK’s framework of labour law including the doctrine of ‘protected industrial action’, the inadequacy of unfair dismissal remedies, the restrictions on solidarity action and the enormous loopholes in the protections offered by the TUPE Regulations.

Some of the key individuals involved in the dispute, including the lawyers who represented the workers at tribunal, will come together to examine the dispute and discuss how the law might be changed to better protect workers in the future.

Watch a video report on the strike here.

Booking details can be found here.