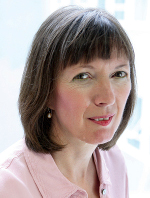 Frances O’Grady, general secretary of the Trades Union Congress (TUC) spoke this week at Hertford College, Oxford, about the risk of Britain leaving the EU. Here are the edited highlights.

“We’re not hearing from workers in the Brexit debate – but it’s manufacturing where the risk is greatest”.

I grew up in Oxford, and was living here the last time we had a referendum on the European Union back in 1975.

I was too young to vote, but during the campaign I came across something that caught my eye. It was a photograph of women workers on strike in Belgium.

They were carrying placards appealing for equal pay for work of equal value.

This was a principle that every nation who joined the European Common Market had to sign up to.

I remember thinking about the power of this idea: that by combining our strength across Europe, working people – in this case, working women – could win a better life.

Of course, Britain has changed radically since the 1970s. But the decision we are being asked to make in June is the same.

In or out, Remain or Leave – the outcome of this vote will mould our country for a generation to come.

This is why it’s crucial that the voice of working people gets a proper hearing in the run-up to the referendum.

So far, the debate has had little to do with people’s everyday working lives. And the campaign has thus far been dominated by businessmen in suits.

What all workers want from Europe is decent jobs and wages, fairness at work and sustainable growth – but we’re not hearing from workers in this debate.

And this is a worry, because I believe a Leave vote carries with it significant risks for workers and the balance of power at work.

There is no doubt that many decently-paid secure jobs would go, over time.

Almost half of our exports go to the EU, which accounts for seven of our ten largest trading partners. And half of foreign direct investment depends on Europe.

Without access to a market of 400 million people, global firms would be more reluctant to invest in the UK.

This isn’t something just for business to worry about; it matters to unions and workers too. And it’s sectors like high value manufacturing where the risk is greatest.

Think about what might happen at BMW’s Mini plant in Cowley. Earlier this month, BMW – which directly employs 8,000 workers in the UK – warned that Brexit could affect the firm’s “employment base” in this country. The company’s statement that it derives “significant benefits” from our membership of the EU chimes with what others have said.

But just as much as jobs and investment, we need to talk about workers’ rights. Because Brexit would potentially mean kissing goodbye to many of the protections working people take for granted.

For example, the right to paid time off for ante-natal appointments for pregnant workers, help for working parents which gives them time off to look after a child who is sick. And equal treatment for part-timers, temps and agency workers.

These rights come directly from our membership of the EU. Dismissed as Brussels ‘red tape’ by some, these rights have undeniably made working life safer, better and fairer for many.

Take the Working Time Directive. When it came in to force 1998, two million workers gained paid holidays for the first time ever. Millions now have more generous paid time-off as a result.

A Leave vote would put all these rights at risk. There’s no guarantee any government will decide to keep them. Instead they could water them down – or get rid of them altogether.
Share article

Ultimately, the Brexit camp has to answer the question: if we left the EU, can they guarantee that the UK government will keep and protect those employment rights? I certainly wouldn’t trust them to.

Yes, the EU needs reform. But everyone knows we can only push for change from within. To stand a chance of shaping the future, it’s worth – to coin a phrase – sticking with the union.”