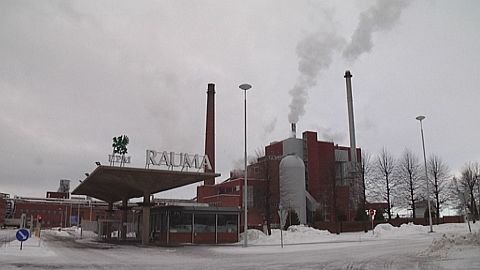 That pressure was mainly caused by papermakers Stora Enso, which has tried to bully shift managers and others in breaking an overtime ban by the Pro union. If talks fail to settle the national dispute a second two-week strike will start on Wednesday, 27th April this time will target Stora Enso and Metsäliitto, which include the latter’s partly-owned paper companies – Metsä-Botnia, M-real, and Metsä Tissue.

Some 1,500 Proliitto are prepared to take industrial action this week.

Top-level supervisors at Stora Enso attempted to apply forced overtime to salaried staff at the Imatra mill ten days into the lawful overtime ban. 350 white-collar employees of Stora Enso and maintenance contractor Efora walked off jobs for two days on 14th April. That was repeated by 100 Pro members of Stora and Efora at the Oulu mill on 21 April when supervisors threatened and coerced workers to break the overtime ban.

The problem started when management verbally attacked and then threatened Proliitto shop stewards who were trying to enforce the overtime ban. In Finland, it is illegal to apply pressure or sanctions on workers over lawful industrial actions. Pro’s job actions were legally certified by the Finnish government in March.

“We have zero tolerance when a company attacks our shop stewards over actions that are legal,” said Proliitto’s chief negotiator for Pulp and Paper, Jukka Hämäläinen. “These actions have only hardened our members’ desire to get what they justly deserve.”

The dispute, with Stora Enso now the antagonist, was compounded last week when Stora management at its global financial service centre in Kotka ordered 35 clerical workers to train replacement workers brought in from Tallinn, Estonia, in preparation for the two-week strike starting on 27th April. Workers refused and on Wednesday morning, 20th April, the Proliitto members began their Easter weekend.

Although FFIF did offer a token national pay increase in government talks on 19th April, that offer still falls short of what Pro and 4,000 of its members employed in pulp and paper demand. That is a pay package structured on current work skills and work requirements in a sector that has seen rampant job losses in Finland.

Labour relations in the papermaking sector, Finland’s biggest manufacturing sector have become more strained in recent years something the International Chemical workers said had become ‘somewhat of an aberration in Finland’. That, in turn, has put pressure on the FFIF to reach terms and end the dispute.

Please cut and paste this message, or something similar, and send today to the e-mail addresses above:

Dear Brothers Antti and Jukka,
We have heard through the ICEM of your dispute in Finland. We understand the work stoppage to be justified because the Finnish employers’ federation has failed to deliver a justified wage increase on the national level.

Please tell all Pro members working in the paper sector in Finland that (name of union/branch/chapel or member) union supports them!

The International Chemical Workers (ICEM) are calling for solidarity messages to be sent to union members on strike in Finland.  Prolitto – the white collar and technical union are now taking part in a two week strike.

On Wednesday, 6th April, 1,000 members of Proliitto in Finland began the two-week strike against UPM, the target paper company in a break-down of talks with the Finnish Forest Industries Federation.

In an insult to these dedicated paperworkers, the industry failed to give white-collar and technical workers a national wage adjustment, despite giving a second year 2.5% increase to blue-collar workers, members of Paperiliitto. Members of PRO deserve at least the same!

(A full ICEM story on this can be found by following this link.)

This is most insulting because in the past few years, paper companies in Finland have downsized the ranks of Pro by 30% through redundancies. It means more work and greater responsibilities have been placed on the 4,000 members of Pro remaining in Finland’s paper sector. Thus, Pro has targeted UPM’s six mills and 20 workplaces throughout Finland with industrial action.

Strike could shut down paper production in Finland