The European TUC has denounced pressure from EU Commission officials to cut minumum wages and pensions as well as reducing what are described as “wage rigidities” forcing labour markets to be “more flexible” in Greece and Ireland.

In a letter to EU Commissioner for Economic and Monetary Affairs Olli Rehn, the European Trade Union Confederation demanded an emergency meeting with Mr Rehn to clarify matters, and warns that ETUC will find it impossible to support action by the EU along these lines.

The ETUC has received reports from trade unions in Greece and Ireland about the role of EU Commission officials in implementing the EU/IMF rescue packages.

According to these reports, Commission officials are ignoring social dialogue between unions and employers as well as collective bargaining processes and directly intervening in the labour markets of these countries.

The ETUC says that “Diktats are being issued which are designed to lower living standards”.

“This policy of detailed interference in labour markets tramples all over pious Commission statements about the autonomy of the social partners, the importance of social dialogue and the specific exclusion in the EU treaties of a European competence on pay” ETUC General Secretary John Monks has declared.

Link to the letter sent to EU Commissioner Rehn 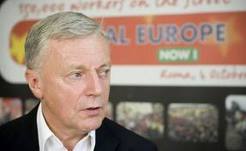 UPDATE: ETUC tells EU Finance Minsiters to back off meddling with pay and labour markets.
The European Council of Finance Ministers has been told that labour market flexibility does not create more jobs. Flexibility simply promotes precarious work, drives out good jobs, and creates high and rising inequalities. Labour market flexibility is at the root of this crisis said the European TUC. According to John Monks, General Secretary of the ETUC: “Finance ministers and DG ECFIN must stop forcing member states to weaken collective bargaining systems as is happening in Ireland. Instead, they should urgently focus on how to prevent financial markets from bringing down one member state after the other”.