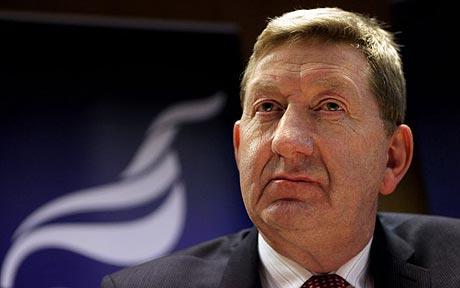 From the Guardian, January 16th by Patrick Wintour, political editor.

The Labour party’s chief union backer has accused Ed Miliband of undermining his own leadership, disenfranchising the party’s core support and leaving the country with all three main parties bent on using austerity to save capitalism.

In an article in the Guardian (January 16th) the Unite general secretary, Len McCluskey, launches a strident attack on Miliband and Ed Balls, the shadow chancellor, prompted by the party leadership’s weekend decision to endorse a continuation of the government’s public sector pay freeze.

He suggests their stance “challenges the whole course Ed Miliband has set for the party, and perhaps his leadership itself”. He also claims Blairites will now seek to capitalise on their policy coup and come for Miliband himself, a path he says “will lead to the destruction of the Labour party as constituted and certain election defeat”.

Up until now, criticism of Balls’s painful endorsement of the government’s clampdown on public sector pay has prompted only attacks from unions not affiliated to Labour. Unite, however, are the single biggest funders of the party.

McCluskey’s broadside represents the biggest union warning yet about the political direction of Miliband’s leadership and shows the risks the Labour leader will face as he struggles to convince the electorate that the party is serious about the necessity of spending cuts to reduce the deficit.

At the weekend Balls stressed that he could not, at this stage, promise to reverse a single government spending cut, even though he said he still opposed the way in which the chancellor, George Osborne, was cutting too far and too fast.

Balls believes he has to reassure an electorate that his support for a short-term Keynesian stimulus to kickstart growth now does not mean he thinks cuts are avoidable later.

In remarks delivered in the knowledge that he was about to be attacked by McCluskey, Miliband delivered an uncompromising message to Labour MPs at their weekly evening meeting earlier on Monday: Labour must be the party prepared to take hard decisions in both good and bad times. “Every shadow cabinet will have to show how they can create longer-term wealth, take on vested interest and make different choices,” he added.

After insisting Labour can be the party for tough times, he reminded his MPs that the party failed in 2010 and must succeed in 2015.

But McCluskey says Balls’s “sudden weekend embrace of austerity and the government’s public sector pay squeeze represents a victory for discredited Blairism at the expense of the party’s core supporters”.

He says that when the public sector unions confront the government over the pay freeze, they would “now be fighting the Labour frontbench as well”.

He adds: “It leaves the country with something like a ‘national government’ consensus where, as in 1931, the leaders of the three big parties agree on a common agenda of austerity to get capitalism – be it ‘good; or ‘bad’ – back on its feet.”

Balls argued in a Guardian interview and speech to the Fabian Society that he wanted to put those out of work ahead of the pay of those in work, but the Unite leader dismisses the argument as the “hoary old fallacy that increasing the wages of the low-paid risks unemployment”.

He then argues: “The view that deficit reduction through spending cuts must be a priority in order to keep the financial speculators onside has been the road to ruin for Labour chancellors from Philip Snowden to Denis Healey.”

He adds: “This is the last gasp of the neoliberalism which led to 2008 and the final point on the arc of ‘new Labour’ politics – from ‘things can only get better’ to ‘heaven knows we’re miserable now’ and will be for the foreseeable future.”

He acknowledges as absolutely reasonable Balls’s assertion that he cannot decide now on spending commitments or which cuts to reverse.

But he claims Balls has gone further and describes him as one of the four horsemen of the austerity apocalypse along with Liam Byrne, the shadow work and pensions secretary, Jim Murphy, the shadow defence secretary and Stephen Twigg, the shadow education secretary. All four have itemised specific spending cuts Labour will endorse.

The Unite leader claims their approach leaves half the country disenfranchised, as well as the 500,000 demonstrators on the TUC march for an alternative last year.

“The real points of differentiation between Labour and the government on the economy are now very hard to identify, the more so since Cameron and Clegg are cutely, if insincerely, positioning themselves as proactive on tax avoidance and executive pay.”

In a further personal attack, he criticises Balls for failing to consult union leaders before his Guardian interview, saying: “It is hard to imagine the City being treated in such a cavalier way in relation to a change in banking policy.

Unite has roughly 1.4 million members and is the dominant voice at Labour conference. Along with the GMB and Unison, Unite was critical to Miliband’s election in 2010. Although it would be wrong to regard McCluskey’s remarks as a threat to the Labour leader, they will be a warning shot that the unions and left are going to fight what they regard as a Blairite policy coup.

The tone of McCluskey’s remarks will be a severe disappointment to Miliband, who has always promised that he will not define his leadership by taking on his own party in the manner of Blair. Labour officials believe the unions have misunderstood the thrust of his new year strategy, insisting they still oppose cuts, but cannot promise to reinstate them, or pretend austerity is not a long-term UK condition.

McCluskey seems determined to mount a fightback on policy, saying the shift in Labour strategy “confronts those of us who have supported Ed Miliband’s bold attempt to move on from Blairism with a challenge. His leadership has been undermined as he is being dragged back into the swamp of bond market orthodoxy”.

He warns: “Having won on the measures, ‘new Labour’ will likely come for the man sooner or later. And that way lies the destruction of the Labour party as constituted, as well as certain general election defeat in my view.”