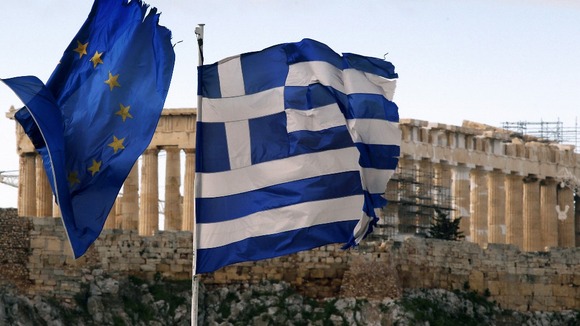 The Greek general election on June 17th presented a clear political choice on whether to continue with the ‘austerity’ measures imposed by the Troika of the ECB, EU and IMF which have caused a disastrous economic slump. Greek GDP fell by over 13 per cent between 2007 and 2011 and contracted sharply again in the 1stquarter of 2012. In real terms the compensation of employees has fallen by approximately 15%. The cause of the slump is the investment strike by capital, down nearly 47 per cent since the slump began and accounting for nearly 90% of the entire fall in output.

Yet Greece is just the sharpest expression of the European crisis, which at the very least is likely to see the continent as a whole remain in a depression. This is a Europe-wide crisis and it requires continent-wide solutions.

As the first step, it is necessary to address the claim that the ‘austerity’ measures (which are actually designed to cut wages and non-wage benefits) are necessary to close the deficit in public finances. As EU Commission projections show, the Greek government’s ‘primary balance’ is a deficit of just 1 per cent of GDP (see table below). The primary balance is the balance on government finances once debt interest payments are excluded. The very large total public sector deficit arises because of interest payments amounting to 6.3 per cent of GDP. The EU projection is that the primary deficit will rise to no more than 2 per cent of GDP in 2013.

Therefore a key component of the Greek crisis could easily be resolved simply by cancelling the debt. The interest payments would no longer be made. This is necessary as it is widely recognised that the debt is unsustainable and a default is inevitable. The EU estimates that the level of public sector is currently over 160 per of GDP. The formula used for assessing debt sustainability is that the real growth rate must exceed the real interest rate multiplied by the debt as a proportion of GDP. More succinctly, government revenues must be growing at a greater rate than the interest payments on existing debt.

Using that formula, if Greece were growing in real terms at 2.4 per cent per year (the average of the 10-year period 1992-2001) then the real interest rate would need to be 1.5 per cent to be sustainable, given the current level of debt. Instead the Greek economy is contracting, at a rate of over 6 per cent a year, and market interest rates are close to 30 per cent.

Previously, the claim was that ordinary citizens in the rest of Europe would suffer through their pension and other funds if there were a cancellation of the debt, or if any Greek government abrogated the debt. Whatever the previous merits of that argument it has been nullified by the exit of most private sector investors from the Greek government bond market. Any private sector investors who remain cannot be ordinary pension funds, as these are not allowed to invest in such high-risk, lowly-rated bonds.

The public sector, through the ECB and through Greek institutions are now the majority holders of Greek government debt. The ECB, as the central bank which stands behind the Euro, cannot possibly go broke as a result of a Greek default; it has unlimited recourse to Euros. It has in any event made significant profits on its previous purchases of Greek government debt.

The main negative impact would be felt on Greek banks who remain holders of their government debt. But these are rapidly heading towards insolvency in any case as the effects of the economic contraction takes hold. Whatever the outcome of the election Greek banks are facing nationalisation at some point As a result there will be a pressing need to recapitalise the banks under public ownership, which is a process that has already begun in Spain under the auspices of the ECB and EU.

Apart from the impact on hedge funds, vulture funds and other speculative vehicles, no disaster follows a Greek default if there is a recapitalisation.

In Britain, the equivalent of US$7.8bn in total Greek debt is held by these speculators. Less than US$3bn is held by British banks or public bodies (mainly the Bank of England). No negative consequences follow from writing this down to zero.

Cancelling the debt would remove one of the huge burdens on the population of Greece. It would not lead to any disastrous financial consequences for the ordinary citizens of the rest of Europe. For those who oppose ‘austerity’ across Europe, cancelling the Greek debt is the main practical contribution that can currently be made in support of those leading that struggle in Greece.