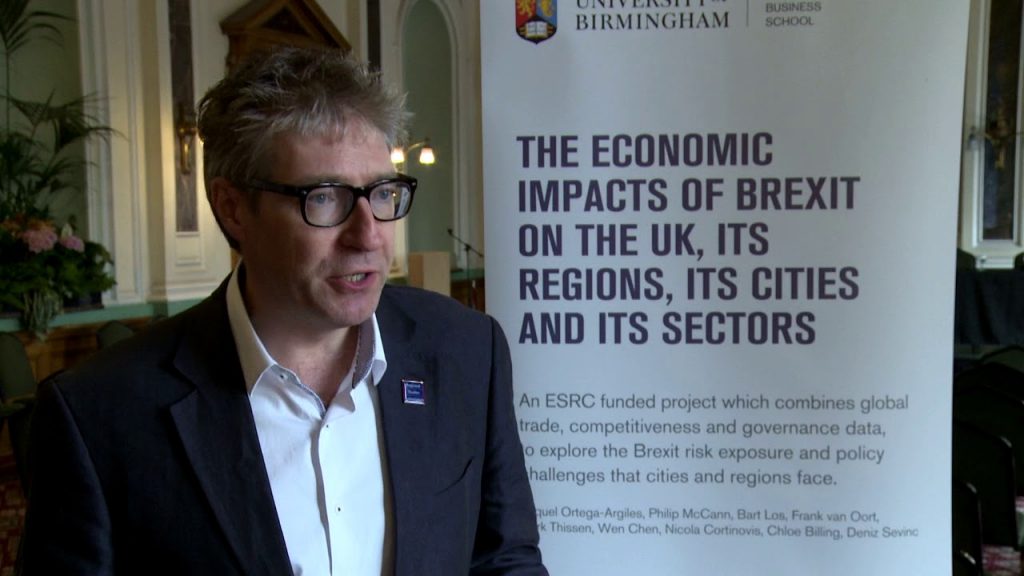 By Professor David Bailey, Professor of Business Economics at Birmingham Business School at University of Birmingham, Visiting Professor at Centre for Brexit Studies and Senior Fellow at UK in a Changing Europe.

Re published from original blog on July 29th and used with permission.

From the 1980s through to the early 2000s, UK productivity grew reasonably well. The measure of economic output per hour of work rose by about 2% a year, on average, before the 2008 financial crisis.  Since then, productivity growth has been dismal; for example in 2018, Office for National Statistics (ONS) figures showed labour productivity growing by only 0.5%.

The UK’s poor record in productivity growth since the financial crisis stands in contrast to its recovery from previous downturns, when productivity initially fell, but subsequently recovered to the previous growth trend.  The Office of Budget Responsibility thought the same would happen this time and has repeatedly forecast returns to more robust levels of productivity growth. This hasn’t materialised, however.

Productivity is seen as an important driver of improved living standards over the long term, enabling companies to pay higher wages as they are can produce higher revenues with the same or fewer resources.

As Paul Krugman once famously puts it in his 1994 book The Age of Diminished Expectations,“Productivity isn’t everything, but, in the long run, it is almost everything.  A country’s ability to improve its standard of living over time depends almost entirely on its ability to raise its output per worker” (page 11).  The UK government has made increasing the productivity of British workers a priority of its industrial strategy.

But the UK’s poor productivity performance doesn’t appear to be improving. Recent labour market data and GDP 2019 first quarter estimates indicate that output per hour – the main ONS measure of labour productivity – decreased for the third consecutive quarter by 0.2% in Quarter 1 of 2019, compared with the same quarter in the previous year. Business investment declined throughout 2018 as noted in an earlier CBS blog, with fears that it is being damaged by Brexit uncertainty, hence affecting productivity growth.

A third element has been highlighted of late in terms of the UK’s ‘regional productivity puzzle’ or why UK interregional productivity differences are so great over such short  distances  when the UK’s relatively institutional  set-up  ought  to  allow  for  technology diffusion across regions.[2]

The UK does have high-performing and high productivity firms in sectors such as pharmaceuticals, automotive sector and the creative industries.  It also has some high-performing cities and regions, notably London.

But the overall picture is one of weakness. Investment – both public and private – is low. The UK’s dysfunctional housing market inhibits labour mobility. There are ongoing weakness in education, training and skills provision for much of the population which will be exacerbated as the economy enters the Fourth Industrial Revolution. There is an over-reliance on the financial sector and there has been weak management with a long tail of lowly performing firms[3], along with lower levels of advanced capital, R&D and skills-training.[4]

These factors are long standing in nature, of course, and cannot explain the post 2008 productivity slowdown.  It might be that aggressive fiscal consolidation, involving sharp cuts in public investment, from 2010, may have led to a permanent fall in the sustainable level of output in the UK economy.[5]

Similarly, Wren-Lewis (2017) suggests that the macroeconomic story is consistent with the notion that both the 2010 budget followed by uncertainty around the EU Referendum from 2015 onwards reduced the appetite for investors to engage in capital deepening (where the capital per worker increases) for almost a decade,[6] with a knock-on effect on productivity.

Economists’ estimates on the long-term direct impact of Brexit on UK productivity – via effects on trade and FDI as trade costs rise and EU market access falls – range from an adverse effect on the level of GDP per worker of 4 to 8%, depending on various modelling assumptions and of course the form of Brexit.[7]  Overall, what this suggests is that Brexit will make relative UK productivity performance worse not better.

Recently, Crafts (2019) has asked whether Brexit might allow the UK more freedom to reform supply-side policy free of constraints imposed by EU membership and by being part of the Single Market.[8]

His response was negative. Like others, he highlights UK policy weaknesses in a range of areas including education and skills, infrastructure, innovation, regulation and taxation. But as noted by others, these are largely ‘home grown’ issues, already under UK policy control.

Brexit itself will not do anything directly to improve the education system, training, or infrastructure, for example. In a broader context, might Brexit provide the opportunity for a policy ‘reset’ moment’ that could enable policy makers to begin to address the underlying issues of Britain’s various productivity puzzles?

That’s not at all clear when policy makers may anyway be trying to minimise the downside effects of Brexit on UK competitiveness. And as Jonathan Portes notes in the Brexit Scorecard, so far, this ‘reset opportunity’ has been missed; “whether that can change will determine the long run success of Brexit.”

Competitiveness can of course be defined in a number of ways. In understanding how Brexit might impact on productivity in the UK, the definition used by The World Economic Forum (WEF) is useful here. It defines competitiveness as “the set of institutions, policies and factors that determine the level of productivity of a country”.

Given both the complexity of the UK’s economic relationship with the European Union built up over decades, and the fact that the form of the future trading relationship is not clear, it is of course difficult to forecast how Brexit will affect competitiveness (and hence productivity) in the future.

In this regard, this measure of the UK’s competitiveness will depend on how successful the UK is in minimising the potential downside on the 14 indicators while maximizing any upside from those that might have a positive impact.

The WEF notes that there aren’t really any precedents but looking at other non-EU nations that have a close trading relationship with the EU suggests that on many of the indicators that are directly influenced by Brexit, the UK currently fares better than non-EU peers such as Switzerland and Norway, such as on: the prevalence of non-tariff barriers; trade tariffs; the prevalence of foreign ownership; and the business impact of rules on Foreign Direct Investment (FDI).

At the same time, aspects of competitiveness where peers like Switzerland and Norway do really well are not directly influenced by EU membership, such as Norway’s good score on the macroeconomic environment (thanks largely to its oil wealth) or Switzerland’s world leading status on innovation (based on a long-standing collaboration between business and academia).

It isn’t likely that the UK would be able to match the latter, for example, without a much greater effort in various policy areas going forward (again requiring a ‘reset’ moment). What this suggests is a clear downside risk for UK competitiveness from Brexit with only limited upside potential, at least in the short term.[10]

So the big question remains as to whether Brexit could offer the opportunity for a ‘reset’ that could enable policymakers to really start to tackle the root causes of the UK’s productivity puzzles. So far, though, Brexit has had the opposite effect, effectively paralysing policy action in a range of areas. As the Brexit Scorecard concluded, perhaps post Brexit this could change, and policymakers could focus on such issues, “but at present it is hard to be optimistic”.

[3] Although recent  analyses  suggest  that  the  under-performance of the more productive firms and larger firms may have in fact dominated the UK’s productivity downturn (https://productivityinsightsnetwork.co.uk/app/uploads/2018/06/P-McCann-Final-synthesis.pdf)

This entry was posted in Blogs, Economics, Unite The Union. Bookmark the permalink.