Brazilian Presidential Election: Unions Say The The Fight Goes On! 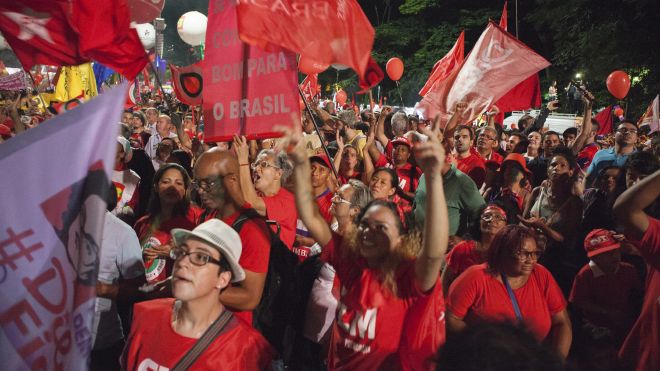 The Executive Directorate of the CUT, in view of the official outcome of the presidential elections, approved the following note, which should be widely disseminated to all workers on the basis of each of the affiliated unions.

The majority of Brazilian voters have just handed over the presidency of the Republic to someone who, during his political career, has always voted against the rights of the working class, opposed social policies, voted in favor of freezing investments in health and education, supported the delivery of the pre-salt and oil reserves to foreigners, offended and threatened left-wing activists, women, blacks and LGBT people. However, almost half of the population voted against the project that will lead Brazil backwards in terms of politics and civilization.

Throughout the campaign, the media were used daily to attack the popular candidacy. Bosses pressured their employees with all kinds of threats. The name of God was used in vain. The social networks were flooded with lies, in an articulated strategy paid by companies with the objective of defaming the Workers’ Party (PT) and its candidate, Fernando Haddad. The judicial system, in addition to arbitrarily blocking Lula’s candidacy, manifested weakness and connivance by not punishing those who openly threatened the institutions or committed electoral crimes. Impunity has contributed to the increase in acts of intimidation and violence against PT voters and to the growing climate of hatred that has divided the country.

Those who think they would destroy our capacity for resistance and struggle are deceived. The PT emerged stronger from this process as the main force of opposition to the neoliberal and neo-fascist government. The CUT and social movements have also strengthened. Lula and Haddad consolidated themselves as the great leaders in the popular-democratic field. The CUT will keep the working class together, preparing it for the struggle in the streets, in the workplaces, in the factories and in the countryside against the withdrawal of rights and in defense of democracy.

The government that will take office on January 1, 2019 will try to deepen the neoliberal program that has been under way since the coup against President Dilma: pension reform, withdrawal of more rights, continuation of privatizations, rising unemployment , wage cuts, rising costs of living, worsening education and health, increasing violence and insecurity. In addition, it will try to persecute and repress the trade union movement, social movements, as well as the democratic and popular sectors in general.

We have a huge challenge ahead of us. It is time for unity of the democratic-popular forces to resist. The CUT will continue its trajectory of struggle and call for its bases to remain mobilized and to resist any attack against rights and democracy.