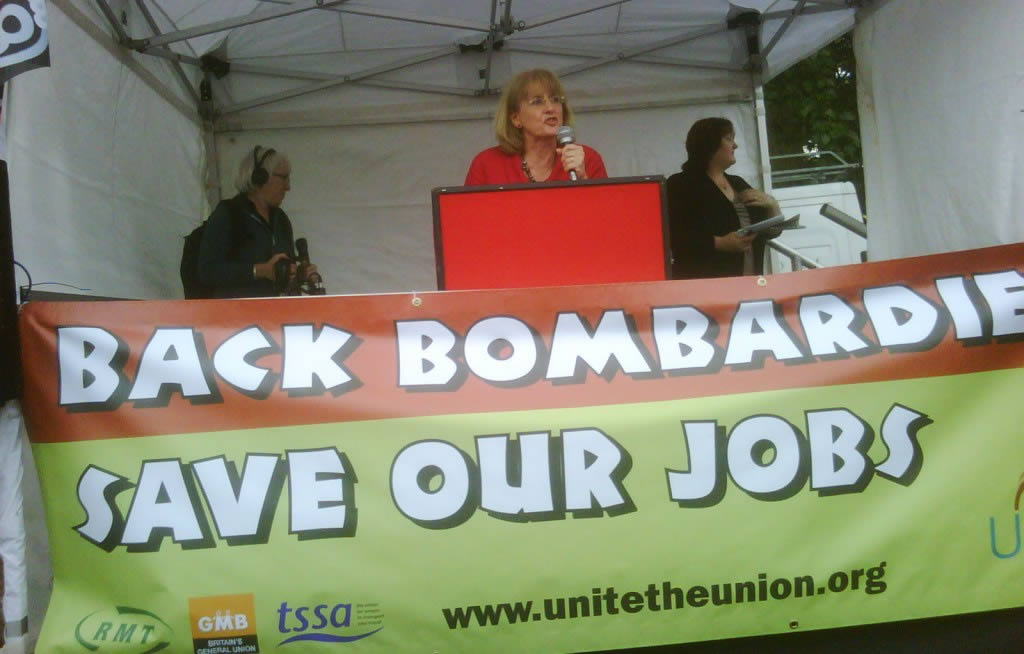 <strong>The ConDem government can now be in no doubt that they must reconsider the decision not to award the contact for Thameslink trains to Bombardier in Derby. 6,000 people (BBC’s estimate – others said 10,000) marched through Derby and heard speeches from both sides of industry as why the decision must now be reversed.

Bombardier plans to cut 1,400 jobs – just under half its workforce – after it missed out on a £1.4bn government contract for carriages. The German firm Siemens has been awarded the contact to build carriages for the Thameslink route, prompting anger from the workforce and unions as well as the management of Bombardier and local politicians.

A poll of more than 25,000 adults for Unite showed 88% wanted the government to reconsider its decision.

Unite’s assistant general secretary Diana Holland told the crowds gathering to move off to the rally that: “This is a wake-up call for the government. It’s time to face facts and admit excluding Bombardier from the Thameslink contract is disastrous. More than 1,400 people will lose their jobs and Bombardier’s future is at risk. There is still time for a rethink to save Britain’s last train maker and repair this colossal error of judgement. Thousands of people will make their message loud and clear today – support Bombardier, support Derby, support British manufacturing.”Three thousand people are currently employed at the Derby facility.

Bombardier UK’s chairman Colin Walton spoke at the rally stating that the whole management team of the company would fight to reverse the decision. 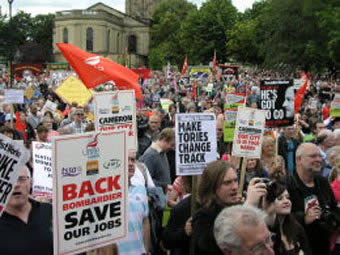 Demonstrators listen to speeches at Bombardier rally in Derby.

Other speakers included local Margaret Beckett MP, who told the rally: “We are not giving up; we are not going away; we know we are right.” RMT leader Bob Crow, TSSA leader Gerry Docherty, spoke passionately about potential job losses and the editor of the Derby Evening Telegraph Steve Hall warned the Conservatives they would be punished at the ballot box if they did not reverse the decision.

Former Unite GS Tony Woodley rounded up the rally with a rousing speech declaring previous governments had not given a damn about UK manufacturing with 2 million jobs lost over the past 25 years and promising that unions would fight to defend manufacturing jobs in Derby and throughout the UK.

Paul Routledge in The Mirror