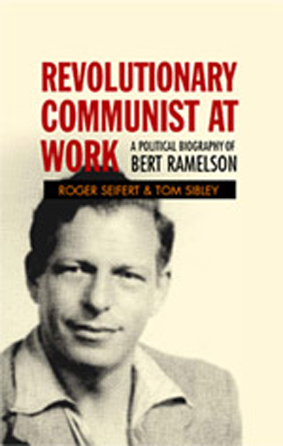 Legendary Communist Party industrial organiser Bert Ramelson was honoured by activists this week at the launch of a political biography about his life and work. Authors Roger Seifert and Tom Sibley spoke at a packed meeting, chaired by former Unison General Secretary Rodney Bickerstaffe at Unite’s Head Office in London.

Bert Ramelson fought in the International Brigades in the Spanish civil war against Franco’s fascists and served as a tank commander in the Second World War before being captured by the Nazis.

He organised a mass break out from his prisoner of war camp, he linked up with Italian partisans who organised his return to the UK.

He then went on to work for the Communist Party, first as Yorkshire district secretary from 1953 and then national industrial organiser in 1965.

In an obituary in The Independent from 1994  Ramelson was described as “no ‘red under the bed’ during the turbulent years of British industrial strife. He was a Communist and proud of it. He had a quick sense of humour and once pointed out to an irritating journalist: ‘At least we reds are in our own beds.’

The obituary went onto say: “Close friends say Ramelson was the mastermind behind the ‘politicisation’ of the Yorkshire miners and it was his 10-year programme and strategy which caused the Yorkshire area of the NUM to become a hot-bed of militancy. He knew that Yorkshire was the biggest coalfield in Britain and calculated, correctly, that once the Yorkshire fell behind ‘progressive Communist policies’ then the rest of the British coalfield would not be far behind. He was one of the six left-wing personalities branded by the Prime Minister, Harold Wilson, during the 1966 seafarers’ strike as a ‘tightly knit group of politically motivated men’. Ramelson laughed this accusation off as ‘one of Harold’s James Bond fantasies’. But as the party’s industrial organiser in the 1960s he organised support for the seamen and opposition to all anti-union laws. During his dozen years as industrial organiser of ‘The Party’, as it became known, Ramelson fought tirelessly to give it a significant say in the Labour movement. He always believed that the party should have its key base at workshop level with communist organisation. He detested ultra-leftists and anarchists and was famous for being a ‘hard man with humour’.

He warned that Labour’s prices and incomes policy in the 1970s was ‘class collaboration’ and pointed out that unpaid wages were lost forever while a temporary freeze on dividends merely deferred profits paid to shareholders. This straight class position was the basis of successful campaigns for the rejection of income restrictions promoted by Labour and Tory governments. He ridiculed the thinking behind Barbara Castle’s In Place of Strife and his drive and ideas led to the formation in 1966 of the Liaison Committee for the Defence of Trade Unions, whose first campaign led to the defeat of Castle’s proposals for regulation of industrial action. He always opposed what he called ‘rank-and-filism’ and advocated workplace pressure aimed at winning official action via their recognised unions.

He wrote many pamphlets and while his sentences were long his titles were short and to the point. One such was Social Contract Cure Or Con-trick? Other pamphlets included: The Case For An Alternative Policy (1977) and Consensus For Socialism (1987). Many who wondered why he talked loudly were unaware that he was hard of hearing, an affliction which he frequently used to his mischievous advantage.

He was sharp in debate and did not weaken his views while under attack. Colleagues said you could have a shouting match with him and still remain firm friends afterwards.

This entry was posted in Blogs, Politics, Solidarity, Trade Unions. Bookmark the permalink.