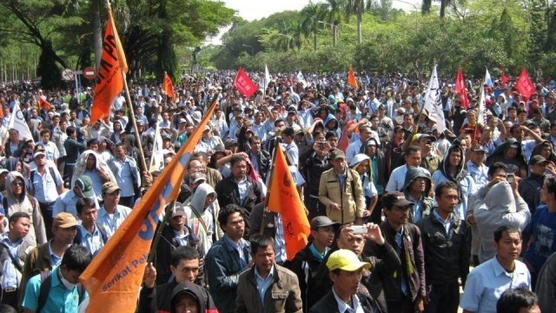 The global paper and pulp company Asia Pulp & Paper APP are threatening to use the military to break a strike by the Indonesian Paperworkers Union – FSP2KI. APP is one of the world’s largest paper and pulp manufacturers.

The union FSP2KI is affiliated to IndustriALL, the global manufacturing union.

The details of the strike and the threat to bring in the military are contained in the letter which can be cut and pasted and sent to the company and the union. Don’t forget to fill in the name of your union.

You can find out more about the strike by clicking here.

I am writing to express my extreme concern following reports that Asia Pulp & Paper (APP) has threatened to use security forces against employees if they exercise their fundamental right to strike.

I have also been informed that negotiations for a new labour agreement between SPK-PD and PT. Pindo Deli Mills Karawang began on December 20th and have been contentious. I have further been notified that SPK-PD announced that it plans to carry out a strike on January 28th – February 28th, 2013 on account of a failure to reach a new labor agreement. Finally I have been informed that, in response to this announcement, management of PT. Pindo Deli Mills Karawang threatened employees that they would respond to the strike with the use of security forces such as the military and police.

Furthermore, unions around the world regard the right to strike as essential to their functioning and will use all legal means necessary to defend it.

If APP uses security forces against a strike by FSP2KI, I will request that my union, ————- launch a campaign against APP and do everything to defend the strikers.

I will also campaign to assess APP’s major brands and ways to connect those brands in consumers’ minds with gross violations of human rights. I will request that my union coordinates these efforts with IndustriALL and their affiliated unions around the world.

On its website, APP includes in its Mission, Vision and Values statement that a key tenet of its philosophy is that “Human resources is the key to success.” I am are sure that you would agree that using security forces against workers for exercising their fundamental rights is not a way to foster the development of human resources.

I urge APP to rescind any threat to use security forces against workers, and to enter into good faith negotiations with SPK-PD in order to reach a fair new labour agreement.