Ahead of the TUC: Len McCluskey warns of major battle on pensions, riots and workers rights 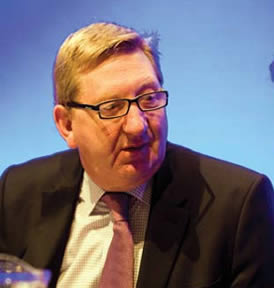 Len McCluskey, Unite General Secretary has warned the UK faces a year of ‘strikes and riots’ as public anger boils over.

Len McCluskey, in an interview with newspapers from the Mirror group (The Mirror and Scottish Daily Record) said the Tory-led Coalition was causing a “major confrontation” with its attack on pensions and plans to increase pension contributions for millions of public sector workers.

Calling the Coalition “worse than Thatcher” in its drive to destroy the NHS, the welfare state and what is left of Britain’s industrial base, he said the unions would remain the “first line of defence”.

“I think all unions, militant and moderate, have been shocked by the attack by this Government and the representatives of the ruling elite and corporate giants”.

Len said he expects a mass walkout this autumn as pension talks between ministers and union leaders stall.

“It looks almost inevitable there will be significant co-ordinated strike action in the public sector before the year is out. I don’t shy away from it. This is no time for us to be cowering in the corner or shaking in our boots in the face of the enemy. We are heading for major confrontation. At least Thatcher had a mandate for her acts of industrial sabotage. This Government has no legitimacy and we have to be prepared to stand up and defend our communities and defend our way of life. We are looking at the privatisation of the NHS and that in itself is criminal. The attacks now are further than Thatcher went,” he said.

There was also a warning of riots worse than those this August as Len accused ministers of widening divisions in society by describing rioters as a “feral underclass”.

“What are they doing about the feral ruling class, who have ripped us to shreds? The spivs and the speculators who have caused the havoc and fanned the flames of casino capitalism. I can see next summer being even worse when all these cuts start to kick in,” he said.

Len McCluskey also called on Ed Miliband to be “bolder” in setting out a radical alternative and warned that unless Labour committed to improving workers’ rights then he would stop funding the party.

Unite is Labour’s biggest donor and has given more than £11million to the party since 1997.

“Our values are values to be proud of and Ed should embrace them. If they don’t have those values, why would I want to start pouring money in?” he asked.

The Mirror’s editorial says that Len McCluskey, “Deserves to be heard when he warns of future unrest on the streets of our country. The Unite general secretary isn’t scaremongering when experts are queuing up to predict that our economy is teetering on the brink of disaster.

David Cameron’s insistence on sticking to a Plan A of cuts, tax rises and austerity is ideological lunacy when in the US President Obama has unveiled a plan to boost jobs. The PM and his Chancellor seem content to let us tip over into a full-scale recession”.

Also check out ‘New Life In Unions?’ in Red Pepper