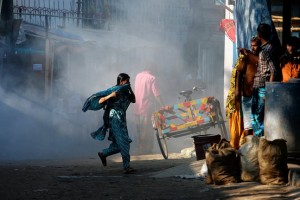 Two garments workers (Badsha Mia and Ruma Akhter) were killed by police, while the garment workers were demonstrating (involved in struggle). The same incident caused 9 people to be injured by bullets, and more than 50 workers were wounded.

As a result, 20-25 thousand workers came out set fire to a garments assembly and knitting factory belonging to DBL Group. The fire spread up to the 3rd floor. Firefighters controlled the fire with the help of extra police and BGB (Border Guards Bangladesh). Police and local sources say that, with the demand for minimum wage (BDT 8000/$100 per month) and some other demands, the agitated workers came out to the street and the workers blocked the street, throwing bricks and tree trunks and roots, and put fire. Police attempted to push them back, but the workers refused to leave the street.

At 4 o’clock the mobilisation spread out, and police start firing rubber bullets. 10 workers got injured. When they were taken to the hospital, one was dead: Badsha Mia, who used to work in the “Assembly knitting factory”. In the evening, Ruma Akhter also died, who took local treatment.

More workers came out from more factories when they heard about the death of Badsha Mia and Ruma Akhter. The street became a battlefield.

Garments workers said, one woman worker was bitten by a manager in “Assembly knitting factory” in sewing section. The agitated workers demanded that the manager go on trial, and they started to damage the factory. When the authorities opened the gate, 10 thousand workers came out and chanted angrily. Without any warning, police indiscriminately started firing.

In favor of SBGSKF, (The Independent Bangla Garments Workers Employee Federation) already we’ve talked with workers, Regional Departmental Head of Police as well as others trade unions to come forward to solve the critical situation. At last night, Honorable Labor Minister took a special assignment to over come the problem within today, I’ve requested to The Honorable labor Minister in the meeting, we should go there and take a necessary step with trade union leaders.

I will inform you with an update news.