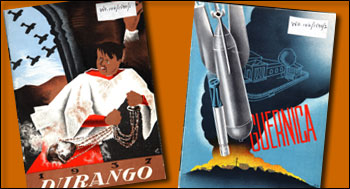 More volunteers may have left Britain with the aim of joining the International Brigades in Spain than previously thought according to documents discovered at The National Archives.

This year marks the 75th anniversary of the start of the Spanish Civil War in July 1936. Despite the British government’s official policy of non-intervention, thousands of men and women from Britain and Ireland were inspired by their political beliefs to fight in defence of the Spanish Second Republic. They were among the first of a generation defined by the fight against Fascism.

The British Security Service, sometimes known as MI5, was interested in which British volunteers were defying the ban to fight in Spain as many were also suspected members of the Communist Party.

James Cronan, Diplomatic and Colonial Records Specialist at The National Archives, said: “The records show that the Security Service tracked the movements of around 4,000 people it believed were trying to travel to Spain to fight with the International Brigades, many more than previously thought. It’s not clear how many made it to Spain although we know that hundreds never returned.

“The International Brigades brought volunteers together from all over the world in defence of democracy but few if any records exist of their service. That’s why uncovering a document like this is so exciting.”

The list has now been digitised and is available to view online at www.nationalarchives.gov.uk/spanish-civil-war. It provides researchers and historians with a valuable new resource and is a good starting point for anyone wishing to find out whether a relative fought in Spain. The annotated list includes entries for the poet John Cornford, union leader Jack Jones and Eric Blair, better known as George Orwell, whose famous book Homage to Catalonia detailed his experiences with the International Brigades.

The newly-digitised material contains more than 200 pages of names and dates detailing the movements of the men and women who left British ports on their way to the frontline in Spain and a roll of honour of those killed in action. A selection of index cards have also been digitised and put online for notable brigade volunteers including the classicist Bernard Knox, Irish Brigade leader Frank Ryan and George Orwell as well as recently deceased veterans such as Sam Lesser, Bob Doyle, Jack Edwards and Paddy Cochrane.

A ceremony will be held on 2 July 2011 at the International Brigades Memorial in Jubilee Gardens, London to mark the 75th anniversary of the start of the conflict with two of the five surviving British veterans. Further commemorations are planned later this year. Contact secretary@international-brigades.org.uk for details.

The International Brigades were formed in October 1936 by the elected government of the Spanish Second Republic and were involved in some of the war’s most critical engagements including the Battle of Jarama in February 1937. They were disbanded in October 1938.

General Francisco Franco, with the support of Adolf Hitler and Benito Mussolini, eventually led the Nationalist forces to victory and remained leader of Spain until his death in 1975.  The surviving veterans of the International Brigades have since been conferred with honorary Spanish citizenship.

The list of 4,000 names and the roll of honour is drawn from Security Service file KV5/112, which was first opened in August 2010. It will be available to download free for a month via The National Archives website: www.nationalarchives.gov.uk/spanish-civil-war.

News item from the Guardian