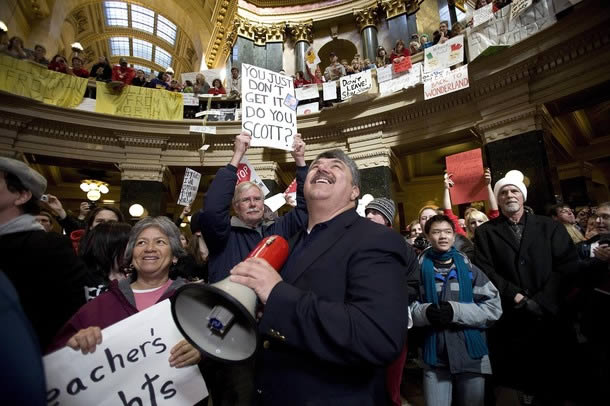 Richard Trumka of the AFL-CIO in Madison, Wisconsin.

The clash between pro-union protesters and Republican leaders in Wisconsin could spark a resurgence of the American labor movement, the head of the USAs largest labour federation has said.

AFL-CIO President Rich Trumka said the effort to strip collective bargaining rights from public workers in Wisconsin and other states has brought a level of excitement to unions that he hasn’t seen in years.

Trumka said he hopes to tap into that enthusiasm to help spur union organizing and growth after decades of decline.

He also wants to use the moment to help define unions in a way that could bring renewed support. He pointed to a New York Times-CBS poll that shows Americans oppose efforts to weaken the collective bargaining rights of public employee unions by a nearly 2-1 margin.

“People are giving us another look now,” he said. “It’ll be up to us to keep it going and continue defining ourselves in ways the American public will support.”

Whether he meant to or not, Trumka said, Wisconsin Govenor Scott Walker started a national debate about collective bargaining “that this country sorely needed to have.”

It’s the kind of attention unions have been craving for years as leaders have tried without success to rekindle the vigor that organized labor enjoyed at its peak in the 1950s and 1960s.

“We’ve been looking for a spark and the spark found us,” said Thea Lee, deputy chief of staff and trade expert for the AFL-CIO. “This isn’t a fight we looked for, but it is one we can turn to our advantage.”

Union members last year represented just 11.9 percent of the American work force, way down from about 25 percent in the 1980s and 35 percent in the middle of the last century.

Energized by the outpouring of tens of thousands of pro-union demonstrators in Wisconsin, Ohio and Indiana, Trumka and other union leaders said they hope to sustain the enthusiasm until next year’s elections.

Unions have already pledged at least $30 million to fight anti-union legislation in dozens of states. The AFL-CIO has provided support for mobilizing protesters and is looking for other ways to keep the demonstrations going.

“If we maintain the momentum into next year, I think (Walker’s) going to have a significant problem,” Trumka said.

Walker says his goal is to force government employees to pay more for their pension and health care benefits to help stem a massive budget shortfall. But the idea remains in limbo after Senate Democrats fled the state to prevent a vote.

Union officials believe public sentiment is on their side.

“People are looking at this and saying this is a struggle I want to be a part of,” said United Mine Workers President Cecil Roberts. “This is our moment.”

Union leaders spoke at the meetings about “not letting them split us up sector by sector,” Trumka said.

Trumka said he was hopeful the support for public sector union could also translate to union workers in the private sector. He sees it as a teachable moment to show Americans how difficult it has become for unions to organize workers at companies where managers often rely on aggressive union-busting tactics.

“It is the law of the land not just to protect but to encourage the process of collective bargaining in this country,” he said.

PROTESTS ACROSS THE USA
Hundreds in Nashville, San Diego and Charlottesville, W.V.; more than 3,000 in Trenton, N.J.; 3,500 in Olympia, Wash. That’s what democracy looked like yesterday from Maine to Hawaii, as America’s workers came together to protest attacks on good, middle-class jobs and collective bargaining rights by Republican governors and legislators in Wisconsin and other states. AFL-CIO Now followed the massive rallies at the Wisconsin state capitol and elsewhere yesterday. Here are a few more updates:

Hoosiers from across the state have been mobilizing to fight against the anti-worker agenda being pushed in the General Assembly. More than 25,000 working men and women rallied at the Indiana Statehouse, voicing their opposition to legislation that seeks to limit collective bargaining, lower wages and weaken the voice of workers in their workplace….Over the week, our rallies only grew in size, reaching up to 10,000 people….As a signal that our voices are being heard, the House Democratic Caucus walked out of the statehouse, refusing to allow the attacks on working families to continue. They have said they will not return to the statehouse until the anti-family agenda has been stopped. This led to the defeat of three anti-worker bills (HB 1468, SB 333 and SB 273), which included attacks on collective bargaining and project labor agreements, along with the falsely labeled “right to work” legislation.

Washington, D.C.: From Chris Garlock of the Metro Washington AFL-CIO: The crowd at Dupont Circle seemed to materialise out of thin air, swelling from a handful to hundreds in just a few minutes at noon yesterday. Chanting “This is what democracy looks like,” nearly 1,000—many wearing Wisconsin’s red and black colors—had gathered around the fountain by the time the rally—part of a 50-state mobilization in state capitals across the nation—ended an hour later. Speaker after speaker linked the battle for bargaining rights by Wisconsin’s public workers to struggles by working people across the country.

“Today the attack is on public-sector workers, yesterday it was industrial unions and tomorrow it’s all of us,” said US Action’s Jeff Blum. “They say take back, we say fight back!” chanted the crowd. “We’ve got to save the American dream,” said University of Maryland student Jesse Zarley, just back from a visit to Madison, “They can’t deny us our rights.” An impromptu glee club led the crowd in a shaky but enthusiastic rendition of Wisconsin’s fight song and former White House Special Advisor Van Jones wrapped up the rally with a promise that “the nightmare is coming to an end and the dream is being reborn. We’re not going to let the hope die on our watch, that’s not going to happen. The good people of Wisconsin could have laid down, but instead, when it was darkest, the people stood together. When you have a dream and someone to stand next to you, nothing can defeat you.”

Maryland: From Adam Wright: As the fight against union-busting continues to swell across America, hundreds of workers galvanized support from local communities as they stood shoulder-to-shoulder outside Maryland’s state capitol at noon today chanting, “Maryland to Wisconsin, we are one!” and “This is what democracy looks like!”

“We are all with Wisconsin today,” said John Rickard, an Ironworker from Baltimore. “We’re here to build a stronger America. Without the collective bargaining and without our voice to discuss our lives, our futures, our children’s futures, we don’t have a voice. And if they kill our voice, they kill us!”

U.S. Rep. Donna Edwards said that she was more than proud to stand in solidarity with the workers of Wisconsin—whose collective bargaining rights are under attack by Gov. Scott Walker—saying, “Public and private sector workers know that there has been a real assault on American workers – not just now but for the last two decades.” She added, “The American worker has had to sacrifice wages and benefits while jobs go off our shores. Meanwhile, the wealthiest 2 percent just keep getting wealthier. This is a real fight for workers in Wisconsin, and its a fight and struggle for workers all across this country….We’re standing for all working people who deserve decent wages, a decent workplace and they deserve the ability to bargain collectively for their rights. It is as fundamental a freedom as any freedoms we know.”

New York: From Amy Desjardins: We had about 1,000 people today in Albany at the state capitol (see news clips here and here), 300 people in Buffalo, 250 at City Hall in Plattsburgh and 1,000 in New York city (see clip).