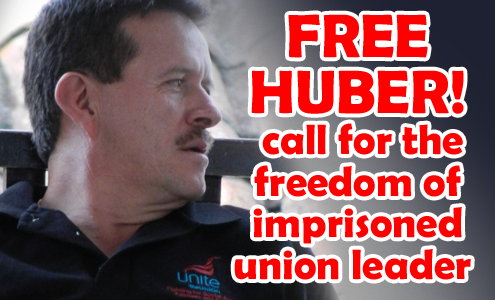 At 15.30 on Sunday 25th August the Colombian trade union leader Huber Ballesteros was arrested in Colombia. Huber was an official TUC guest for the upcoming TUC conference. A JFC led delegation of trade unionists and politicians from Britain, Ireland, Canada and the US had just met with him in Colombia in late July.

Huber will now be unable to travel to England as he is currently locked away in a prison cell in the Colombian capital. He is facing the outrageous charges of ‘rebellion’ and ‘financing terrorism’. JFC is campaigning for his immediate release. Please support our campaign by signing the petition here. And please share the petition with all your contacts.

Our fringe event at the TUC Conference in Bournemouth will be dedicated to Huber and there will be an update on the current peace talks. The JFC fringe is on Tuesday 10th September at 12.45 in Tregonwell Hall 1.

For more information see here and please forward on to your contacts.

The arrest of Huber has been denounced internationally. The ITUC and the ETUC have made public statements calling for his release. MPs raised it as an emergency point of order in parliament. An article was also published in the Guardian.

Huber Ballesteros is a close partner of Justice for Colombia and an executive committee member of Colombia’s largest trade union federation, CUT.

He has been involved in organising national industrial action which has been taking place across the country for over two weeks. Strikers and protesters have been violently attacked by the police, and the Army have been sent onto the streets across the country. Nine people have been killed and 800 injured since the strikes began on August 19th. President Santos publicly attacked the Patriotic March for their involvement in the strikes. As yet, the government has not negotiated with the majority of the strikers.

The timing of Huber’s arrest is a clear attempt to punish Huber for his trade union work. It is systematic of the continuing policy of the Colombian government to use the legal system to criminalise protest and silence political opponents.

With your continued support, Justice for Colombia will be campaigning relentlessly for Huber’s release. And for the release of all Colombia’s political prisoners.