Why Labour needs a manufacturing strategy 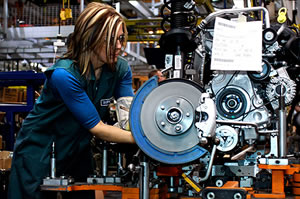 Despite a last gasp improvement in manufacturing figures at the fag end of last year, after four years of austerity measures the UK economy flat-lined in 2012.

Many analysts and commentators are already predicting this year will prove to be “groundhog day” for the UK economy – more stagnation, more cuts – more austerity.

While other countries have adopted an interventionist strategy to try to get their economies moving, notably Germany and the USA, the UK and EU economies such as Greece, Spain, Portugal and Ireland are trapped in never-ending austerity measures that drive down economies and hit workers the hardest.

Their mantra is “there is no alternative”.

The Coalition austerity measures, attacks on welfare benefits and on employment rights are taking us backwards not forward.

If we are to move forward one important way to do it is through an interventionist strategy in the manufacturing sector.

Apart from some good news in the automotive industry, the rest of UK manufacturing has limped along, with the government acting like Mr McAwber – hoping for something to turn up. Unite has strongly argued for an interventionist manufacturing strategy and we are campaigning for this in the Labour Party.

In 2012 we saw a number of closures and big job losses with some companies still wedded to moving work out of the UK in a “race to the bottom”. The closure of the Coryton Oil Refinery in Essex means the UK’s energy needs could be compromised in the long term.

The mass redundancies at Honda and Ford, with the proposed closure of the Transit van plant in Southampton, will also hit UK manufacturing hard. On top of the job losses that are headline grabbers there are many small and medium sized companies who have been denied support from the Banks and have gone to the wall costing thousands of well paid, skilled jobs.

The Labour Party has begun to realise the importance of manufacturing. New Labour had given up on manufacturing until it was too late, clinging onto the notion a “light touch”, deregulated finance sector and over-reliance on the service sector would sustain the economy.

The Labour Party has realised the error of its ways.

We need a new skills framework and we need to maximise the opportunities that the low carbon revolution has to offer.

These are common sense policies that will get things moving again – rather than the approach of the coalition government. Introducing, as the Conservatives and Liberal Democrats have done, failed 1980s-style youth employment schemes, failed Enterprise Zones, and attacking basic employment rights, will do nothing to boost the economy and will not create jobs in the long run.

The response that Osborne’s “shares for rights” scheme, where workers are encouraged to give up their basic employment rights in exchange for company shares, has received a lamentable response – not just from workers but from employers too.

In Europe this week the Socialist group of MEPs have demanded the EU intervenes and uses considerable muscle to get manufacturing moving again as austerity measures are biting hard and some countries are fearful of big plant closures this year.

Rather than more austerity, more cuts to welfare and policies which hark back to the past we need to move forward with a strategy for manufacturing and policies for growth –something Labour must now adopt in 2013 and deliver on in power.

This blog first appeared as an article in Labour Briefing and was also published on left Foot Forward.