Why do we have ‘austerity’ and what is the alternative?

The national launch of the People’s Assembly Against Austerity is a very welcome development. It brings together a number of the largest unions, anti-cuts group and political forces both inside and outside the Labour Party in opposition to austerity policies.

Many will have been drawn into active opposition to government policies because a single aspect of them, perhaps the cuts in public sector pay and pensions, or social protection for people with disabilities, or the imposition of the bedroom tax or the very high level of unemployment among young black people, or the string of cuts which have driven women out of public sector jobs, facing reduced childcare provision and increasingly bearing the burden of reduced social care.

All of these policies are linked and generally go under the title of ‘austerity’. The term is a little misleading, as it implies that conditions have generally become worse for all. But that is not the case.

One of the first acts of the Coalition government was a simultaneous increase in VAT and a cut in the level of corporation tax. According to the Treasury these amounted to approximately the same (£12bn to £13bn) in terms of revenue. But the VAT hike was disproportionately paid for by the poor and middle income earners, who spend more of their incomes on VAT-able goods. The corporation tax cut was an increase in the net income for firms. Taken together they amount to a transfer of incomes from workers and the poor to capital and the rich, the owners of firms.

This transfer of incomes from labour and the poor to capital and the rich is the essence of austerity policies. It is workers and the poor who are being made to pay for the crisis.

The purpose of austerity

In an economic downturn, profits fall at a greater rate than the fall in output. This is because profits are the surplus of firms after they have paid costs, including fixed costs, and the costs of labour and materials. As the revenue from sales falls but costs are static or do not fall so far then profits are hit. Therefore a key mechanism for restoring profits is to reduce costs, most especially the costs of labour.

This is what happened in the current slump, as shown in Fig.1 below. In nominal terms, before taking account of inflation, between 2008 and 2009 GDP contracted by £39bn and the operating surplus of firms fell by £33bn. Of course, in real terms the fall was more severe in both cases. But the natural outcome is that profits will bear the brunt of the fall in output. 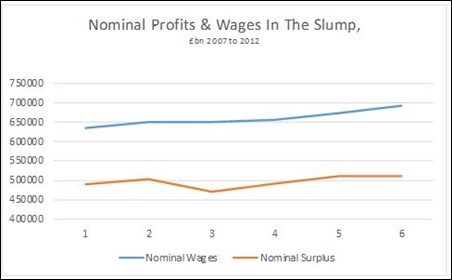 ‘demonstration effect’, designed to lower the ceiling for pay in the private sector. Cuts to social protection entitlements are meant to force all workers to accept lower pay. These policies are supplemented by privatisations which reintroduce the accumulation of profits into areas of the economy formerly run by the state (NHS, rail, Royal Mail, and so on) and corporate taxes are cut to boost net profits.

This has had an effect. The austerity policy introduced in 2010 has led to a £40bn increase in firms’ operating surplus from their low-point in 2009. But this is not yet a thorough-going reversal. Nominal wages have risen by £43bn over the same period. It should be stressed that these data do not take account of inflation, so that there has been a real fall in living standards but equally only a very limited rise in profits.
Austerity policies have reversed the decline in profits and reduced the wage share of national income. But they have not yet allowed profits to rise so far that firms are once more investing and expecting profits.

The alternative to austerity

The cause of the economic slump remains the slump in investment. In Britain the fall in investment (gross fixed capital formation) more than accounts for the entire fall in GDP. In real terms between the 1st quarter of 2008 and the 1st quarter of 2013 GDP fell by £38.7bn while the fall in GFCF is now £50bn (as other components of growth have risen such as government spending and net exports). This is shown in Fig. 2 below. 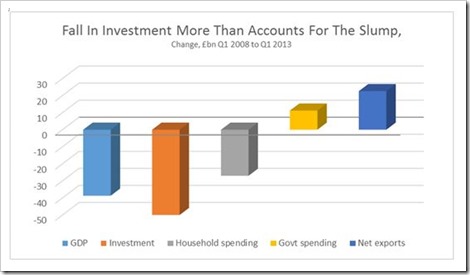 This is now a combination of the private sector’s refusal to invest alongside government cutting its own investment. It is not possible to have a sustained improvement in economic activity without an increase in investment.

The long-term relative decline of the British economy is driven by the declining rate of investment. In 1970 the ratio of investment to profits was 70%, that is the total level of investment in the economy was equivalent to 70% of firms’ operating surplus. In 2012 this investment ratio had fallen to 42%. As a result, investment has fallen from 19.4% of GDP to just 14.1%. 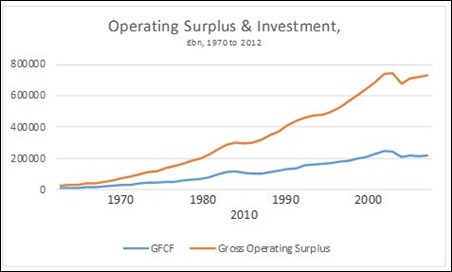 As the private sector’s refusal to invest is because they cannot be certain of making a profit it falls to the state to invest on its own account. It can make successful large-scale investments which are not profitable to the private sector because uniquely it derives its return from taxation. Any general increase in economic activity will see tax revenues rise and social protection payments automatically fall.

The vast level of uninvested profits is now sitting idle in state-owned banks which failed because they made unprofitable investments. It is simply a matter of political will to tap these vast resources for investment in housing, energy, transport, infrastructure and education. This would lead to economic revival.

The reason it is so fiercely resisted is because it runs counter to the whole thrust of austerity, which is to restore profits. But increasing state-led investment is the only feasible road out of the crisis which does not lead to the further immiseration of the overwhelming majority of the population.

Republished from the Socialist Economic Bulletin with permission.