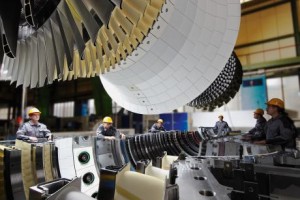 There has been increasing media coverage about the UK’s growing ‘productivity gap’ in the last few weeks, but why is it important? The shaky and unsustainable return to growth experienced over the last year has not produced the improvement in living standards many were hoping for. The inherent structural weaknesses in the economy that were a major cause of the economic crash of 2008 remain very much the same today.

Productivity is one of the main ways of measuring the health of the economy and year after year from 2007, UK productivity levels have fallen behind other comparable economies such as France and Germany, with productivity growth now the weakest since the Second World War.

Government has the power to enact a range of economic policies that will have a real impact on the lives of ordinary people and their prospects for the future. A responsible attitude towards the economy is desperately needed and this briefing sets out what productivity is, why everyone is talking about it and what actions are needed from the next government.

So what is productivity?

Productivity is an average measure of the efficiency of production. Productivity is how employees’ ‘output’ at work is measured over a given period of time and is influenced by investment in machinery or training that allow workers to be more productive.

UK productivity (GDP per hour) and income grew faster than in France, Germany and the United States between 1979 and 2008, reversing a century of relative decline. However UK productivity stagnated after the Recession of 2008-09 and remains about 15% below historical trends. This is due to a mixture of cyclical and structural effects but austerity policies have made things worse.

According to the latest ONS figures, UK productivity growth is the weakest it’s been since the second world war. Productivity decreased by 0.2% in the third quarter of the last financial year, leaving output per hour worked 17% lower than in 2007.

The poor performance in recent years has widened a longstanding productivity gap between the UK and other countries. UK GDP per hour is currently around 17% below the G7 average.

Why does it matter?

Productivity has a direct correlation with wages. If output is higher, all things being equal, workers are paid more. As a result of the UK’s poor productivity, businesses have sought to keep their costs in check by keeping a lid on their wage bills.

Wage stagnation combined with growing inflation over the last 5 years has led to a sharp fall in living standards for millions of working people.

The weakness of productivity is a direct result of the government’s austerity policies. Austerity has reduced demand and economic growth and the labour market has adjusted to this weaker growth through severe cuts in wages and the quality and security of work.

Employment growth, often only part-time and via ‘zero hours’ contracts, has been concentrated in the lowest–skilled, lowest-paid jobs.

Unless we can improve productivity, wages will remain low, living standards will continue to suffer and tax revenues will struggle to improve.

The UK has a poor productivity record which is linked in large part to poor investment by both public and private sectors. If our infrastructure had matched that of other leading global economies during the first decade of the 21st century economic growth could have been 5% higher to the benefit of millions of working people and their families.

Under the Coalition, investment levels plummeted. Public investment halved in the first 2 years of this parliament alone.

What action can be taken?

Investment in training and skills

Productivity can be improved through investing in developing the skills of staff through apprenticeships or training. Current schemes are failing to provide the training and apprenticeships that are needed to fill the growing skills gap. In 2014 the number of people starting apprenticeships fell by 70,000 and there were 6,000 fewer 19 to 24-year-olds starting new apprenticeships.

An end to austerity

Just a 1% increase in public sector pay would inject between £470 and £880 million of extra value into the economy and enable much needed government investment.

Higher wages not only benefit workers, they can also incentivise investment and training, enabling workers to deliver higher outputs above their wage increases and thereby also generating profits. If everyone was paid a Living Wage or above the Treasury would gain an additional £3.6 billion a year.