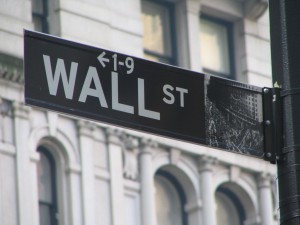 This article was posted on the USW blog on December 31st, 2010.  It is written by Les Leopold the author of  “The Looting Of America”, is well worth sharing and some of this may sound familiar…..

“What a great year for Wall Street: profits up, bonuses up and, best of all, criticism down, especially from Washington. Somehow Wall Street has much of America believing its lies and rationalizations. We’re even beginning to forget that Wall Street is largely responsible for the economic mess we’re in.

So before we’re completely overtaken by financial Alzheimer’s, let’s revisit Wall Street’s greatest fabrications for 2010. (For the full story, please see The Looting of America.)

1.”Honest, we didn’t do it!”
Two years ago Wall Street’s colossal greed crashed our economy. Our financial elites created and spewed highly leveraged toxic assets around the globe. These poisonous “innovations” pumped up the housing bubble and Wall Street grew insanely rich in the process. When it all burst, we learned that the big Wall Street institutions that had caused the crash were far too big to fail — and too connected. High government officials came to their rescue with trillions in cash and guarantees — underwritten, of course, by we taxpayers. Everyone knew this at the time. But if you asked just about anyone on “The Street” they denied all culpability and pointed the finger everywhere else: Fannie, Freddie, the Fed, the Community Reinvestment Act, tax deductions for home buying, bad regulations, not enough regulations, too many regulations, too much consumer debt, the rating agencies, the Chinese — and on and on. Sadly, their blame-shifting strategy worked, bamboozling the media and people across the political spectrum. The GOP members of the Financial Crisis Commission are so drunk with this Kool-Aid that in their minority report, they refuse even to use the words “Wall Street” or “speculation” in assessing the causes of the crash. Hypocrites? Crooks? Morons? Take your pick.

2.”The overall costs will be incredibly small in comparison to almost any experience we can look at in the United States or around the world.”
Ever since Treasury Secretary Timothy Geithner screwed up his tax returns we knew he was numerically challenged. But his statement to Congress on December 16, 2010, on the cost of the bailout shows a willful inability to count. Yes, Wall Street has paid back most of our bailout funds. Whoopee! Our economy is in shambles, and millions of people are suffering. With his offensive “no big deal” analysis, Geithner glosses over all this human misery, and sidesteps the hidden costs of the bailout, including the financial insurance we taxpayers provided to every giant financial company in the country via the Fed. On the open market, that insurance — which guarantees trillions of dollars in toxic assets — would come at a very steep price. We coughed it up for free. But that’s still chump change compared to the human costs of the worst employment crisis since the Great Depression — the lost income, the depleted savings, the ravaged neighborhoods. Then there’s the capsized state and local budgets, the public service reductions, the laid off teachers, firefighters and police officers — all resulting from a plunge in public revenues caused by Wall Street’s crash. Why aren’t these costs on Geithner’s balance sheet? A cynic might think Tim was priming us to accept the latest round of Wall Street bonuses. Hey — they paid us back, so why should we care how much they earn?

3. “It’s a war. It’s like when Hitler invaded Poland in 1939.”
Steven Schwarzman is supposed to be brilliant. After all, he made billions as head of the Blackstone Group, a private equity company and hedge fund. But last August, as some members of Congress mulled about eliminating a very lucrative tax loophole, he suffered a mental meltdown and saw an impending Nazi invasion. But the awful attack never happened. Schwartzman and his fellow hedge fund honchos all held onto their unbelievable tax break: Hedge fund and private equity income is still only taxed at 15 percent rather than at the top income tax rate of 35 percent. (That’s because, inexplicably, it’s considered “capital gains,” not income.) Taxing Schwartzman’s income as income would cost him hundreds of millions of dollars — and the prospect of this apparently triggered a shock spasm that catapulted his foot into his mouth. I’m sure my IQ isn’t high enough to keep up with the genius logic behind Steve’s analogy. But just who is Hitler and who is Poland in his scenario? Maybe in his grandiose conceit, his firm is as big as Poland? Or it would require a Blitzkrieg to wipe out his tax loophole? In reality, even if Schwarzman had to pay a 90 percent tax rate (as he would have under Eisenhower), it would hardly have been a hardship — let alone World War 3. He’d still have more money than he could ever spend in his lifetime. Schwarzman should be proud though: He gets 2010’s Dumbest Wall Street Quote of the Year Award. Bravo! (In 2009 the honor went to Lloyd Blankfein, CEO of Goldman Sachs, who claimed he was “doing God’s work.”

4. “The hard truth is that getting this deficit under control is going to require some broad sacrifice, and that sacrifice must be shared by employees of the federal government.”
But not by Wall Street. President Obama words of November 29th came only days before he “compromised” with the Republicans to continue the Bush tax cuts for the super-rich and to bestow an enormous estate tax gift to the 6,600 richest families in America. Mr. President, the “hard truth” is that you’re slapping around public sector workers because you don’t have the nerve to take on Wall Street. If you had the guts, you could raise real money by going to war with Steven Schwartzman and eliminating the hedge fund tax loophole. By the way, closing that loophole for just the top 25 hedge fund managers would raise twice the revenue than you’ll get by freezing the wages of all two million federal workers! (See “The Wall Street Tax Debate that Never Was” )

5. “25 hedge fund managers are worth 658,000 teachers.”
Nearly everyone on Wall Street sincerely believes that they are “worth” the enormous sums they “earn.” You see, their pay is determined by the market, and markets don’t lie. They reflect the high value our skilled elites bring to the economy. So we shouldn’t be shocked that the top 25 hedge fund managers together “earn” $25 billion a year, even at a moment when more than 29 million Americans can’t find full-time work. The outrageous economic logic of Wall Street compensation has those 25 moguls taking home as much as 658,000 entry level teachers (they earn about $38,000 per year). How can that be justified? It can’t. These obscene “earnings” are the product of 30 years of financial deregulation, as well as the tax cuts and tax loopholes that our government has just extended. The hedge fund honchos get most of their money by siphoning off wealth from the rest of us, not by creating new value. I dare Wall Street to prove otherwise.

6. “To bolster the economy we need …. an improvement in the relationship between business and government (the current antagonism, even if not the primary explanation for slow hiring and sluggish investment, does seem to be affecting hiring and other business behavior).”
In this op-ed, Peter Orszag, Obama’s former budget director, parrots the Wall Street line that employers aren’t hiring because of “regulatory uncertainty.” Mother of God, how much more certainty do they want? The Republicans and Blue Dog Democrats aren’t about to let Obama seriously regulate Wall Street, even if he wanted to, which he doesn’t. The truth is that employers aren’t hiring because there’s insufficient consumer demand for goods and services. But at least Peter Orszag is a man of his word. He personally plans to “improve the relationship between business and government” by tapping his government contacts at his new fat job at Citigroup, the nearly failed mega-bank that he helped to save at taxpayer expense. Orszag could have landed a coveted professorship at just about any university in the world. But apparently the 42-year-old wiz kid prefers Citigroup’s multi-million dollar compensation package. Any bets on how long it takes for Larry Summers to cash in?

7. “Lengthened availability of jobless benefits has raised the unemployment rate by 1.5 percentage points.”
You see, the unemployed cause their own unemployment, at least if you believe this assessment from a March 17th research note from JP Morgan Chase. (Next, Wall Street will call for a return of the Poor Houses.) The theory is simple — you give people money not to work and they won’t look for jobs. Still, it takes chutzpah for JP Morgan Chase, the beneficiary of billions of dollars in taxpayer largess, to criticize the unemployed for not finding jobs that aren’t there, precisely because JP Morgan Chase helped to destroy them! Dear JP Morgan research staff: Five to six workers are now competing for every available job. If that’s too complicated for you quants to grasp, maybe you should try a game of musical chairs in the trading room.

8. “Private employers, led by our revitalised financial sector, will create the jobs we need — that is, if the government would just stay out of the way.”
We now need 22 million new jobs to get us back to full employment (5 percent unemployment). In addition, each month the economy must generate another 105,000 jobs just to keep up with new entrants into the workforce. To get to full employment, the private sector would have to create about 630 firms the size of Apple (35,000 employees each). These numbers don’t lie. Does anyone on Wall Street really believe that the private sector alone can pull off this miracle? But really, why should they care? They’ve got theirs, thank you very much. The painful truth that both Wall Street and Washington refuse to face is that if the big, bad government doesn’t fund or create millions of new jobs, we’ll face crippling unemployment for decades to come.

10. “I’m shocked, shocked to find that gambling is going on in here.”
Okay, okay, Claude Raines said that in Casablanca, not on Wall Street. But Wall Street and its defenders say exactly the same thing about their opaque derivatives games. Louise Story’s excellent piece in The New York Times shows how a handful of banks have cornered the market clearinghouses for derivatives – entities that are supposed to make derivatives less risky. The big banks are limiting competition, according to Story, because they “want to preserve their profit margins, and they are the ones who helped write the membership rules.” Meanwhile, Wall Street is quietly pushing to exempt its most profitable derivatives from even these rigged exchanges. So don’t be “shocked, shocked” when Wall Street crashes again and we’re asked to foot the bill. And that’s when, not if.

Les Leopold is the author of The Looting of America: How Wall Street’s Game of Fantasy Finance destroyed our Jobs, Pensions and Prosperity, and What We Can Do About It Chelsea Green Publishing, June 2009. He is working on a new book, “How to Earn $900,000 an Hour: The Rise of Wall Street Billionaires and the New Class War,” which is to be published in 2011.

This entry was posted in International Trade Unions, Media, Politics. Bookmark the permalink.