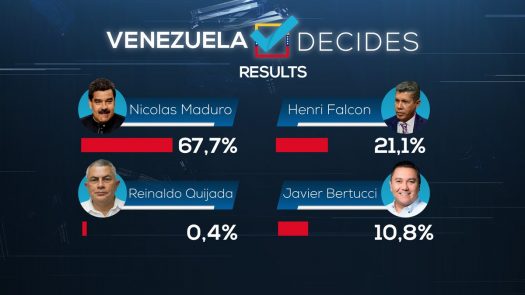 The election was observed by 150 international observers who confirmed the free and fair nature of the vote, including former Ecuadorean President Rafael Correa who said “No one can question the Venezuelan elections… in the world there is no election as monitored as Venezuelan elections.”

Despite pressure from the Trump administration not to do so, international leaders have started to recognise the results and all governments should follow suit.

Following his victory President Maduro called for a permanent dialogue process and former Spanish PM Jose Luis Rodriguez Zapatero, who monitored the election, has offered to mediate dialogue between Venezuela’s government and opposition.

Governments internationally should do all they can to facilitate and support such a process.

It is to be hoped that dialogue prevails. Any attempt to use violence to overturn constitutional mandates, including that of the democratically re-elected president, must be opposed.

However, the Trump administration does not support dialogue. Instead, it is continuing to seek ‘regime change’ by various means including harsh sanctions aimed at starving the country of financing, military threats and invoking the possibility of a coup.  These will only exacerbate the country’s difficulties and divisions, not facilitate dialogue.