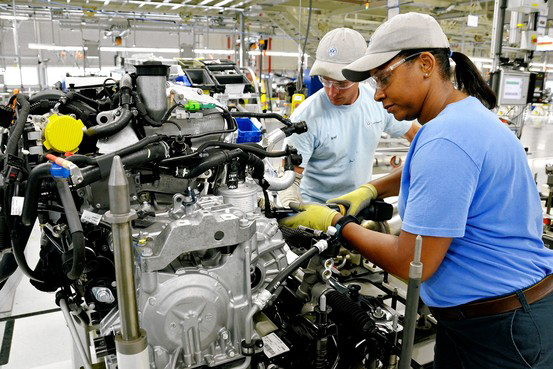 Workers at the VW Plant in Chatanooga have formed a UAW local to push for union recognition.

Volkswagen global works council is backing renewed efforts by the United Auto Workers in the United States to secure union recognition for US workers at the German car makers Chatanooga, Tennessee plant.

In a statement this week Germany’s giant IG Metall union, the Global union federation for manufacturing IndustriALL and other international VW labour representatives backed the UAW bid to secure union rights at the plant..

The UAW lost an organising vote in February at the Chattanooga, Tennessee plant, following the intervention of right wing politicians who ran a campaign to persuade workers not to agree to a German style works council structure, which the company had agreed with the USW with the help of the German union.

The USW says it had nearly enough members in its newly formed local (union branch) for the automaker to recognise it as exclusive bargaining agent for the plant.

Casteel said the UAW is asking VW to accept it as a representative for those workers who joined the UAW local.

In July this year it formed Local 42 after talks with Volkswagen, UAW officials said.

In another twist a ‘stooge union’ has emerged at the plant called American Council of Employees as a counter to the UAW’s local’s organisation. Setting up ‘stooge’ or ‘yellow union’ is part of the anti-union playbook.

According to Reuters, a worker named Mike Burton, an anti-UAW campaigner at the VW Chattanooga said at the time he hoped the new union would force VW to hold another vote to determine which one is favored by hourly employees.

UAW’s Gary Casteel said ACE isn’t a union and it doesn’t have a governance structure. “They’re not a labor organization,” Casteel said. “If they were, they’d be subject to federal reporting.”

VW has made it clear that it wants to have Chattanooga representation on its global works council.