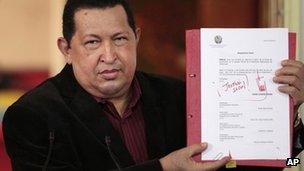 Chavez holds up a copy of the new Labour Law

The law also seeks to eliminate private sub-contracted employment which the government has previously described as an ‘exploitative practice’ produced by the neo-liberal politics of the 1990s.

Chavez signed the law on national television stating that he was carrying out an act of social justice for Venezuelan workers at a time when labour rights were being rolled back across Europe and the United States.

“We have a law which will go down in history. That history tells us that the triumph of the people, of the workers, has never come about without a long process of resistance, of struggle, suffering even. This law, which I will have the honour of signing is the product of a long process of struggle,” he said.

Responding to calls from workers to revolutionise Venezuela’s existing labour law, last November Chavez promised to pass new legislation via decree before this year’s International Workers’ Day on May 1st.

Since then, organised workers collectives, trade unions and political parties such as the Venezuelan Communist Party (PCV), as well as networks such as the ‘Feminist Spider’ have been carrying out workshops across the country aimed at collecting workers’ proposals for the law.

According to the government estimations, the new law has been written taking into account more than 19,000 proposals submitted from diverse sectors of Venezuela’s working population. The government has described the new legislation as a “first law in the transition towards socialism”.

Workers’ collectives have cited the re-establishment of a retirement bonus, determined by the workers’ monthly wage at the time of retirement multiplied by years in service, as one of the greatest gains represented by the new law. The bonus was eliminated in 1997 when Venezuela’s labour law was redrafted by the Caldera government in conjunction with big business and under pressure from the International Monetary Fund.

As well as re-establishing the retirement bonus and backdated pay for all workers retired since 1997, the new law will also re-instate double compensation pay in the event of unfair dismissal.

This requirement was also eliminated during the 1997 reform and obliges the employer to pay wrongly dismissed employees compensation amounting to double their retirement bonus.

The new legislation has also been described by gender groups as a big step forward for women’s rights in the workplace, with post-natal maternity leave being raised from 12 to 25 weeks and increased job security for new parents, who will now be protected from dismissal for two years following the birth of a child.

Chavez went on to announce that a national retirement fund will be set up by the government in order to process payments to workers, with Venezuelan Chancellor Nicolas Maduro confirming that workers will be free to choose whether the monthly sums set aside for their retirement bonus go into the new government controlled fund or into a public or private bank.

Chavez also confirmed that a government body will be set up with a view to ensuring that employers comply with the new legislation.

Workers and political organisations have celebrated the signing of the legislation as a positive step towards creating a socialist society and dignifying the lives of Venezuelan workers.

However, many organisations have also been quick to point out that the labour struggle is now more relevant than ever, arguing that issues such as the rights of informal sector workers and the role of socialist workers’ councils have not been adequately addressed within the current legislation.

The Feminist Spider Network’s website applauded the new law for opening up new spaces for labour organisation and recognising the central role of workers in creating community wellbeing.

According to the international polling agency Consulting Services, over 80% of Venezuelans also view the law positively, with only 13% taking a negative view.

Businesses will now have 12 months to adapt to the new legislation and implement any changes.