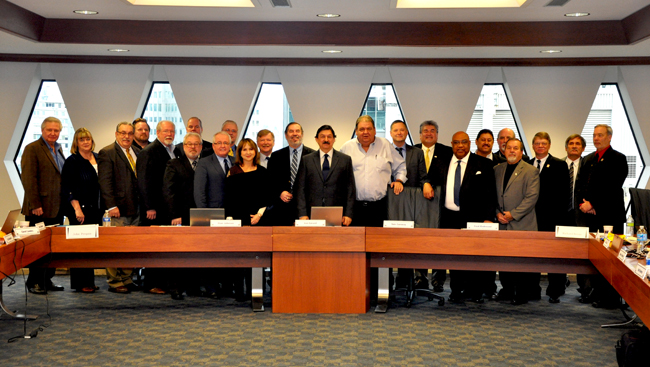 The International Board Of UWS with Napoleon Gomez in Pittsburgh.

Anyone who follows this blogsite will know of the situation with Napoleaon Gomez of Los Mineros union in Mexico.

Napoleon has been living in exile in Canada, in the safe keeping of the United Steelworkers after being hounded out of his own country with threats of jail and even assassination  for standing up for his members and speaking out against government corruption and greed. The Mexican government brought criminal charges against him after he denounced as “industrial homicide” the death of 65 miners at Grupo Mexico’s Pasta de Conchos mine.

In August, a Mexican appeals court dismissed the last of the charges against him.

He was on the Interpol wanted list – but has been removed however, he has still found it hard to travel outside of Canada, with the threat of being turned back at a border or even re-arrest.

But now we can celebrate! Last week the United Steelworkers (USW) extended a warm welcome to Napoleón Gómez Urrutia, President and General Secretary of the National Union of Mine, Metal and Steelworkers of Mexico (Los Mineros), as he visited Pittsburgh, USA and met the Board of the Steelworkers union.

Gómez Napoleon spoke to the USW’s International Executive Board meeting in Pittsburgh, and later addressed the entire staff of the union.

It was his first visit to the United States since 2006.

“Napoleón is one of my heroes,” said USW International President Leo Gerard “For eight years he stood strong against the attacks on his union and constant threats against himself and his family. I am proud that the USW and the entire international union movement have stood with him in the fight for justice for Mexican workers.” 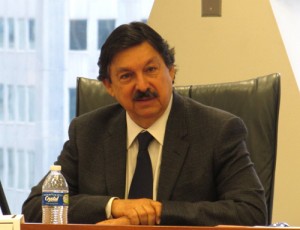 “We have won many victories, but the campaign against us is not over,” Gómez said in his address to the Executive Board.  Over the past several years, Los Mineros have negotiated wage and benefit increases averaging 14percent per year. At the same time, Gómez said that the union has built strong cooperation with many employers.

“Last month we brought together 40 Mexican and multinational companies at a meeting in Vancouver focusing on joint strategies to increase productivity and shared prosperity.”

Gómez described the cooperation between the USW and Los Mineros under their Solidarity Alliance, including coordination at common employers such as Grupo Mexico and ArcelorMittal, collaboration on organizing campaigns; joint work on health and safety; Mineros participation in the USW Leadership-Scholarship program; and, the establishment of a Mineros Women of Steel program.

“I am proud of our alliance with Los Mineros,” said Gerard.  “I welcome Napoleón back to the United States, and I hope to be with him when he returns to Mexico.”