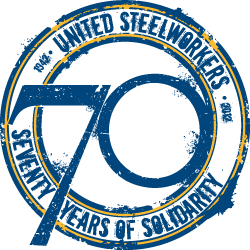 The United Steelworkers Union was founded 70 years ago in the Music Hall of the Cleveland Auditorium, Ohio.

Formed by the Steelworkers Organising Committee who set out to unionise thousands of exploited steel and metal workers across the USA and Canada. They faced tremendous battles as the corporations opposed unionisation, using hired thugs and agents to break strikes. They stockpiled guns, tear gas and ammunition and on May 30th, 1937, US Memorial Day, the Chicago police opened fire on a peaceful steelworkers strike rally. Strikers fled as they faced an attack by the cops. Ten workers were killed – all shot in the back or side. A few weeks later in Youngstown the cops killed another striker after tear gassing the crowd including women and children.

In May 1942, the SWOC and the Iron, Steel and Tin Workers Union met in Cleveland and created the United Steelworkers of America. They represented 700,000 workers and elected Philip Murray their President.

Today the USW is the the largest manufacturing union in the USA and Canada and Unite’s partner union in Workers Uniting.

Across the USA and Canada the union, like Unite covers many sectors, including manufacturing sectors such as metals, paper and packaging, chemicals, oil workers, glass, motor components, healthcare, civil aviation, and transport. 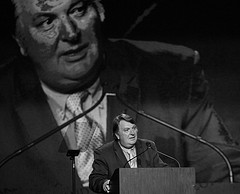 During the week of the rally, I was proud to represent Unite at the USW Glass Workers Conference, to address the USW Executive Board and to speak at the 70th Anniversary rally of 1400 delegates bringing a message of support and solidarity from Unite – highlighting the disputes and campaigns Workers Uniting, Unite and the USW had supported each other in various ways: Vale Inco, Honeywell, Cooper Tire, Rio Tinto, Mayr Melnof, the UK health service and Southampton City Council.

During the week, Unite delegates took part in political schools, visited Wisconsin to help in the campaign to get right wing and anti union Governor Scott Walker out of office and our young members played an important role in the USWs Next Generation project.

Congratulations to the USW on your 70th Anniversary! A proud union with a proud history and tradition. 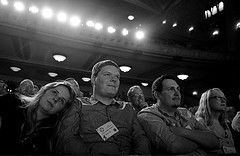 Click here for photo’s of the events in Cleveland