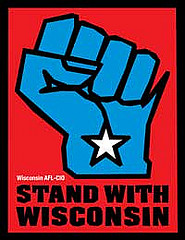 Participants included not only union members, but farmers on tractors, rock stars like the Foo Fighters and thousands of families carrying homemade signs and chanting, “This is what democracy looks like.” Steve Earle has released a digital version of Harlan Man to support the unions – “Strictly Hardly Bluegrass”!

On Friday, Walker signed legislation stripping most public employees in the state of their collective bargaining rights. The measure was passed by the Republican-controlled Legislature after being removed from a larger “budget repair” bill that was stalled when 14 Senate Democrats left the state to prevent a vote.

The Democrats, dubbed “The Fabulous 14,” returned to a hero’s welcome Saturday. “The Fabulous 14 left Wisconsin because Governor Scott Walker gave us no voice,” said Senator Spencer Coggs of Milwaukee. “Thank you for being our voice while we were gone.”

The crowd, which some estimated as high as 150,000, included many Minnesotans. Unions sponsoring buses from Minnesota included Education Minnesota and the Minnesota Association of Professional Employees.

Before the speeches began, 53 farmers drove tractors around the Capitol square, to the cheers of participants.

The legislation signed by Walker strips most public employees in Wisconsin, including state workers, teachers and county and city employees, of their right to have their union bargain over benefits and working conditions. They will have very limited rights to bargain over wages.

Over the past month, protesters held many rallies in Madison and occupied the Capitol for several days. Unions, community groups and other opponents of the legislation also held rallies and other events in dozens of cities across the state.

Spurred by the attack on workers in Wisconsin and elsewhere, the national AFL-CIO has scheduled a Day of Action April 4, the anniversary of the assassination of the Rev. Dr. Martin Luther King, Jr., who was killed in Memphis, Tenn., while supporting striking sanitation workers.

While rallies are expected to continue in Wisconsin, the focus has shifted to the recall of eight Republican senators who supported Walker’s bill. Volunteers are gathering signatures and say recall elections could be scheduled by summer.

In addition, the Democratic Party and unions have filed court challenges to the Senate’s passage of the legislation, saying the Republican leadership’s actions violated the state open meeting law.

Opponents also are targeting Walker’s supporters in perhaps their most vulnerable place – the pocketbook. Last week, Madison Firefighters Local 311 President Joe Conway called on union members to withdraw their money from M&I Bank, whose executives and board members were among the highest donors to Walker’s campaign in 2010.

According to media reports, union members withdrew as much as $192,000 from a Madison branch of the bank in one day, forcing it to close early.

Support from Ver.di : Members of the German services union, ver.di, will turn out to to support bargaining rights for workers in the United States. They know that collective bargaining is not possible unless workers are able to join unions and participate in their own organizations free from the fear of reprisals by their employers.

In a letter to Wisconsin Gov. Scott Walker, who is trying to take away the right of public employees to bargain for a good, middle-class life, Frank Bsirske, chairman of the United Services Union ver.di of Germany, said Walker’s “proposed unilateral action” is: an attack on one of the fundamental pillars in a well-developed democracy, where social dialogue and collective bargaining through trade unions secure constructive relationships between employers and employees. This kind of relationship has proved its high value in many countries, both in times of economic growth and during crisis.

The ver.di members are part of a global effort with the International Trade Union Confederation (ITUC), the Council of Global Unions, UNI Global Union and the Communications Workers of America (CWA) to organize 40,000 T-Mobile USA technicians, call centre and retail workers all over the United States. T-Mobile is a wholly-owned subsidiary of Deutsche Telekom, a German company that employs nearly 132,000 workers in Germany, most of whom are ver.di members. In Germany, Deutsche Telekom respects workers’ right to belong to the union and engages productively with the union through collective bargaining.

Ver.di members have learned about the reality for T-Mobile workers in the United States, as T-Mobile USA workers have told stories of being instructed to turn in their colleagues for receiving union materials or to report any gathering of workers, even if they take place in the evening or on weekends. U.S. workers described their terror of even learning about their rights fearing that any demonstration of interest in the union would result in reprimand, reprisals surrounding promotions or opportunities for advancement, or outright dismissal.

Ver.di was shocked and disappointed that a German employer that has participated in dialogue and collective bargaining in its home country would stoop to the worst union-busting practices in its operations in the United States and other countries. Because they expect better from Deutsche Telekom they have taken a leadership role along with the the global labor movement to carry out a coordinated campaign to ensure that all Deutsche Telekom/ T-Mobile workers can exercise their right to organize and bargain collectively free from fear and intimidation.